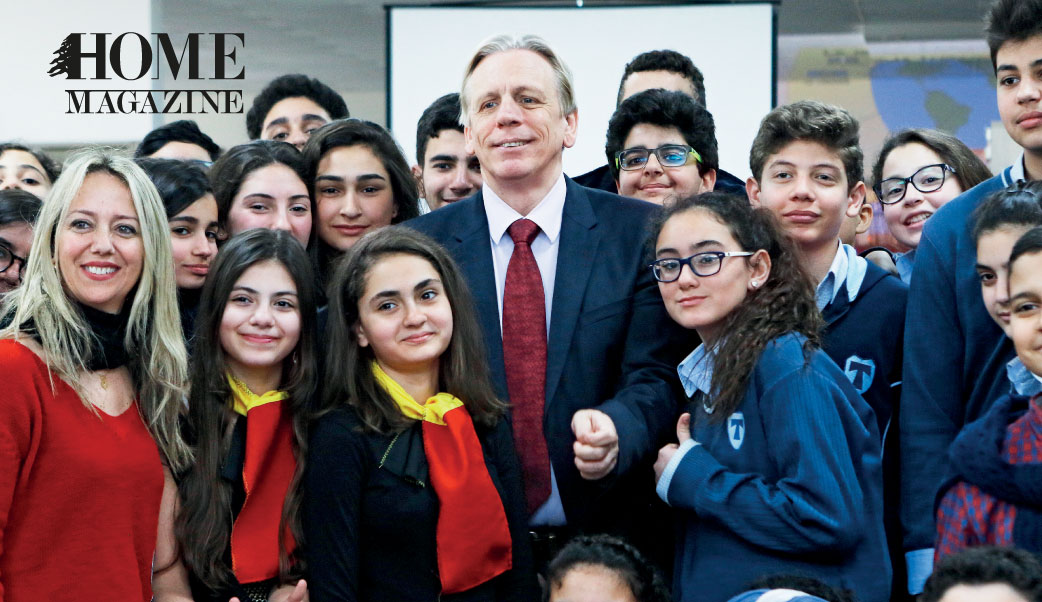 HOME sat down with Alex Lenaerts, Belgian Ambassador to Lebanon and Consul General in Syria, to discuss his impressions of the country: books, music and the environment. Naturally, it would be impossible to ignore the similarities between our two countries and their all-important aspect: small is beautiful.

You chose Lebanon from a dozen available ambassadorial posts. We are intrigued…

Yes, that’s true. The position of a diplomat, of an ambassador even more so, is to add value and I chose Lebanon to add value to both our countries, Belgium and Lebanon. Lebanon is in the heart of the Middle East, the last example of Islamo-Christian coexistence; it was important for me to be here, as well as being Consul General in Syria. Lebanon is a real mosaic of the whole Middle East. We can understand much of all political, economic and social aspects of the region, as all these are concentrated here.

Thanks to the Lebanese also, the country is very open to the world. I had already spent one weekend in Lebanon prior to being posted here but I already knew many Lebanese through my other posts in South America and Africa. I loved the Lebanese character that I felt was similar to our Belgian character: my theory, for what it’s worth, is that we are small countries but we are also central to our respective regions and we have different communities within our small countries. We are better able to understand others and are more tolerant of others because we live with others and are both models of coexistence.

As you say, our two countries are very similar: we are both diverse and are small countries amid larger neighboring countries. What can the Lebanese learn from your example?

I think there are many things that the Lebanese can teach us. But, if there is one message we can transmit, it is that it is always possible to make peace with one’s neighbors and to build something together. We are also a complicated country. We have had our share of war and suffering: the first chemical weapon ever used was during the Battle of the Yser, during the First World War.

“At some point we put our differences aside and made peace with our neighbors, some of whom were friends and others enemies. Peace is always possible.”

Yet despite being invaded over and over and being a battlefield for much of the twentieth century, Belgium is also one of the six founding members of the European Union. At some point we put our differences aside and made peace with our neighbors, some of whom were friends and others enemies. Peace is always possible.

You have been in Lebanon for almost three years now. What were your first impressions and how have they changed

What first impressed me was the energy, the dynamism, of the city. I eventually discovered that behind this energy is a real cultural effervescence. I was very impressed with the cultural scene here in Lebanon. I do believe that Lebanon can still improve when it comes to the environment and architectural heritage. This is a fabulous country with mountains, the sea and the cedars, but they are being gradually destroyed.

My comments are not meant to be construed negatively but constructively. I believe more cooperation is needed on this front. Lebanese love their country, sure, but this is different to a love of the earth, of the land and of safekeeping it for future generations. In Europe we have committed many mistakes as well. We have destroyed much of our heritage and we now have strict laws against that.

“Real cultural effervescence. I was very impressed with the cultural scene here in Lebanon.”

Which of these laws would you say have been the most effective? What can we learn from them?

One of the more effective measures that the three regional parliaments in Belgium (Brussels, Flanders and Wallonia) have passed has been the creation of the Royal Commission of Monuments and Sites. The commission is made up of architects, engineers and art historians who class buildings as a way of protecting them.

Naturally these laws were not very popular at the beginning and we actually saw a shift in the ownership structure of these classified buildings. But we also saw a rise in their value eventually.

What about the role of women, especially as regards peacebuilding?

Women play an essential role in all aspects of any country’s existence and I think they have a very important role to play in peacebuilding as well. I try, modestly and in my own way, to promote Lebanese women. I organize a yearly event at the residence where we give the platform to Lebanese women to talk and exchange ideas.

You started your career in journalism. How do you feel the sector has changed over the years?

The sector has certainly changed a lot. I started out my career in radio journalism and we sort of anticipated this change. Our radio station was one of the first independent radio stations in a very closed sector where radio and television stations were mostly state-owned.

Today the media is getting ever more concentrated, and that is a shame because with this concentration there tends to be a certain editorial line and some press freedom is lost.

I see that Lebanon has a very dynamic press sector. I am impressed that such a small country can have, not only so many magazines and newspapers, but also that there are publications in Arabic, French and English. It is very impressive.

Did you keep any journalistic remnants as a diplomat?

(Laughs) As a good journalist, I always check my sources! And I never go with just one source.

“As a good journalist, i always check my sources!”

You mention the effervescence of the Lebanese creative scene. What is it that has marked you the most? As a reader, music lover and movie fan, do you feel that Lebanon fulfills your cultural needs?

Before I came to Lebanon I knew the classics – Feyrouz, for example – when it came to music but I discovered that the whole scene was vibrant. Even on the dance scene there is innovation, in song there is innovation, Lebanon is on the cutting edge of all these domains. I have also discovered many great Lebanese photographers as well whose work I greatly admire.

Before arriving in Lebanon, I had also read the works of Amin Maalouf. I discovered Maalouf through his book Ports of Call (Les Echelles du Levant) and then I read his other works. What I love about him is that he is a very diverse author; his non-fiction work and his essays are just as compelling as his fictional work. I reread Ports of Call after coming to Lebanon and I could see it in a different light. There were aspects of it that I could only understand after being here and that I did not understand when I first read the book 20 years ago.

As regards the cinema, I do not know much other than the films of Nadine Labaki and I was quite impressed with Philippe Aractingi’s latest movie, Listen. But I can see that there is a lot of effort being made and I think that the Fondation Liban Cinema is doing a great job advancing the sector.

As regards sustainability, what role do you think companies can play through their CSR (Corporate Social Responsibility) activities?

I am not an ecologist but I am sensitive to this issue. This is an important question because traditionally sustainability has always been the realm of ecologist political movements. But that is not enough. Anyone in a position of power, business people and financiers need to invest in the environment, in the future.

What will you take with you when you leave?

Honestly, I don’t want to think of leaving because I am very happy here. But we diplomats are nomads and we never stay longer than four or five years in any one place, so I will have to go.

I will definitely take with me many friendships that I have made and I hope to keep them after I go. That is the most important thing.