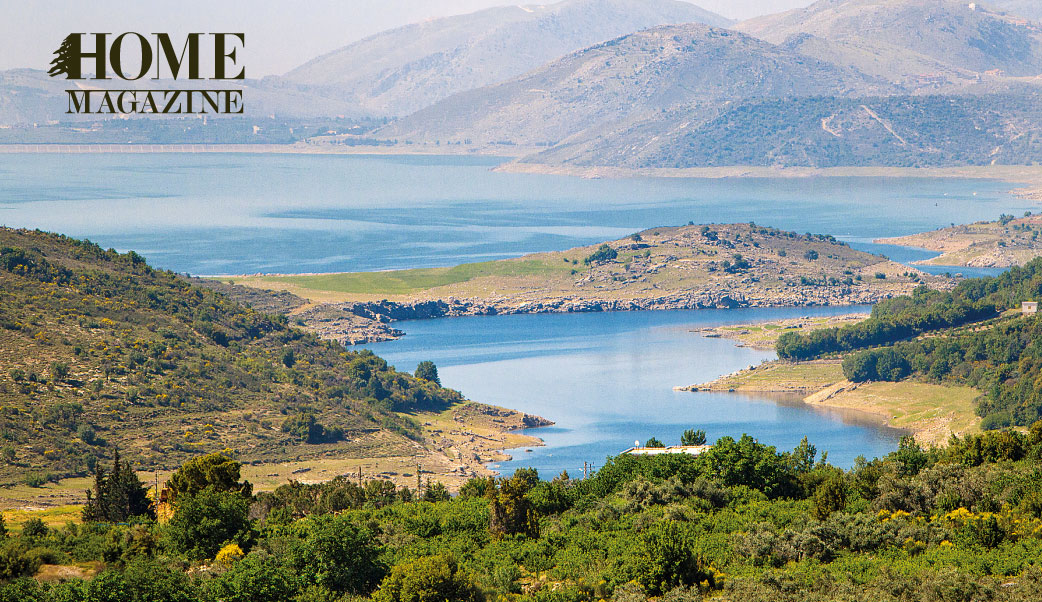 A place that has a soul, a man who has a vision and a huge love for a mother which fueled his life with motivation. Maroun Chedid shared with HOME Magazine the start of his successful career. He shared with us his passion and his attachment to the Lebanese terroir, his story of success, working hard and defying obstacles to achieve and reach his aspirations. But what’s next?

Born in Saghbine, a village in West Bekaa, terroir played a major role in Chedid’s life. Chedid started working on his family’s estate when he was eight years old. Rising early to water the plants with his father or helping with the planting of new crops. He recalls that during the olive season his family would sit together and enjoy the fruits of their harvest, and the smell of olives in his family’s courtyard is still fresh in his mind.

“The smell of olives in his family’s courtyard is still fresh in his mind.”

“Seven years ago, we were attending a training session about olive oil in Italy, they gave us some to smell and guess whether it came from black or green olives. Throughout my career I have learned all the technical and scientific details about olives so it wasn’t hard for me, however the smell took me back to the courtyard in our house and I directly knew the answer from the smell,” explains Chedid.

Launching of a career

Chedid left his village at the age of 17 to study Hotel Management in Dekwaneh, he used to see his parents once every three to four months. Simultaneously, Chedid worked at Faqra Hotel which helped in launching his rich career. Chedid was meticulous and disciplined. “When you live away from your family especially in a dormitory, people frequently enter your life and leave; however this experience offers you a new level of learning and when it came to my work, money was never an issue for me, it was always about me and my career,” says Chedid.

Chedid mentioned two chefs who had great influence on his career, Robert Hojeili who taught him the base for Lebanese food and Chef Majid Hakem whom he worked with at the Century Park Hotel in Kaslik.

In 2004, Maroun Chedid was awarded the Bocuse D’Or Gold Medal at the Lebanese National Selection. He then won the 7th place in the fish category at the International Bocuse D’Or in 2005.

The following year Chedid organized and launched the 15 day Lebanese Food Festival at the Hyatt Regency hotel in New Delhi, India. Chedid also founded the culinary art department and the student application restaurant ‘L’Atelier’ at Saint Joseph University. Chedid’s achievements continued and in 2008 he lead the Lebanese national team in the Bocuse D’Or in Shanghai, China. Chedid was awarded the title ‘Chef of the Year’ in 2013 by the Toques Blanches du Monde, Lyon. This year, Chedid was invited to host Food’inSud as Godfather ‘Parrain’ with Michelin Star chef Gerald Passedat in Marseille, France and is a member of the jury in the Arabic language adaptation of the world-famous culinary television competition Top Chef Middle East on MBC.

Reading books is not the only way to learn. Traveling and being exposed to arts offers a new level of learning and provides new perspectives that can nourish different parts of the soul as well. His determination allowed him to open the doors to his success. Chedid used to attend a lot of trainings and reported everything he saw. Contests helped him as well; for him, competitions are the time of the year when a person exceeds himself. “I learned rigor and discipline in my kitchen from Europe,” says Chedid.

“I read a lot about successful chefs and I realized that I have two choices, either remain a cook for the rest of my life doing the same tasks daily or become a successful executive chef and cross borders”, Chedid adds.

Integration of arts and food

Chedid describes himself as an eternal learner and is always open to everything that can boost his inspiration and can be reflected in his cuisine. Chedid loves modern jazz and technology and attends many exhibitions every year: Gulf food -Dubai, SIAL-Paris, TUTTOFOOD, Cibus-Parma and Ambiente-Frankfurt. Chedid also visits wine exhibitions.

“You shouldn’t look at things solely from a chef’s perspective, but also that of an entrepreneur and an artist. A client is not only coming to eat, they are coming for an experience which is more than just the dish you prepare. That’s why chefs should expose themselves to different experiences,” says Chedid.

Chedid considers his business flair innate however blended with raw passion and will power, this artist was transformed to an entrepreneur. Chedid used to mirror successful chefs; taking into account their pits and falls, he decided to start a company. With his consultations and his culinary experience, he succeeded in developing more than 50 outlets around the world. Chedid added catering to his expertise then developed Georgette, a line of mediterranean terroir cooking essentials inspired by his mother Georgette Chedid. Chedid is currently working on his new restaurant in the heart of Ashrafieh that will have a Mediterranean style with Lebanese influence and will include a museum.

“For me Lebanese food is on the top of Mediterranean cuisine, I am a Lebanese chef, this is our identity. If we want to invade the world, this is our strength,” explains Chedid.

“My dream is to have a school not only an academy. I want to create a brand, a history, an institution. An institution that lives after me, a legacy. I don’t know how much I will succeed but all my energy and thoughts are directed to it,” adds Chedid.

For Chedid, success is like a very long road with many turning points, whenever you think it’s the end, another route comes into sight.

“I am driven by passion, passion with a common sense. However sometimes I lose the common sense and I go only with the passion and this is very dangerous,” adds Chedid.

“Success is like a very long road with many turning points, whenever you think it’s the end, another route comes into sight.”

Maroun Chedid’s muse is his mother. She was a strong figure but had a tender heart and she has always been Chedid’s role model. Georgette was not educated but with a radiant smile and a warm heart, she managed to empower herself to build a bright future for her kids. She was a fighter and wanted the best for her children. Every year, she used to go to Beirut and sell olive oil, ‘kishik’ and yogurt to buy the latest trends for her children.

“We were the first people in the village to wear new collections. My mother used to support the family. I am who I am today because of her and I always work to make her proud”, says Chedid.