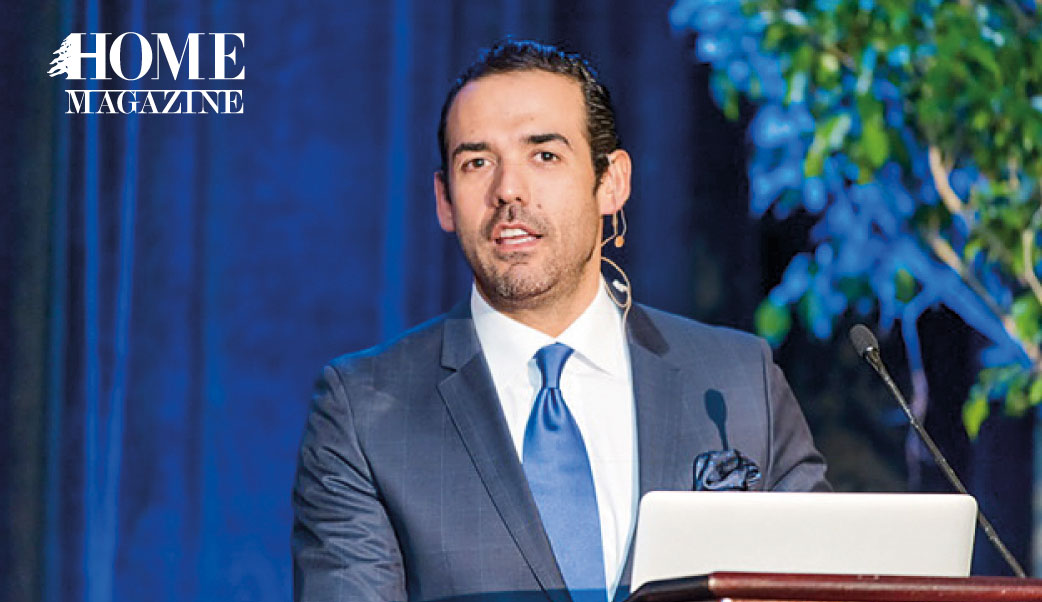 A journey of success will have ups and downs along the way. It needs determination, persistence, and belief. Doctor Gaby Moawad spoke to HOME about his inspiring journey.

A decision worth making

It all started when Dr. Gaby took the right decision. He was born in 1976 in Zgharta. After graduating from high school, he went on to study medicine at the Lebanese University, and completed a residency in Obstetrics and Gynecology at Balamand University. When the war broke out in 2006, he decided it was time for him to leave. “I didn’t want to bury my dreams in a cloudy future and I didn’t want my kids to experience such a turmoil,” he said.

It was a frantic time for Moawad as he tried to prepare for his new life in the US. “In just three months, I passed the required exams and I applied to The George Washington University (GW),” explains Moawad, “It was the toughest decision I ever took, and sometimes the toughest decision and the right one are the same”. Having already completed four years of residency in Lebanon, Dr. Moawad then repeated the whole process again at GW. “If you can dream it, you can do it, and giving up on your goals for one setback is like slashing your other three tires because you had a flat tire,” he adds. On a personal level, making the decision to redo his residency was only a mind obstacle. “The biggest obstacles in our lives are the barriers our mind creates, taking such decision was very hard because it was choosing whether to walk away from my dreams or try harder”. After making this decision, he had to prove himself right. “I’m not talented, I’m not a genius and not a special person. I’m simply a hard worker,” he admits. For him, that makes all the difference. Success needs perseverance, hard work and determination. Dr. Gaby Moawad is board-certified in Obstetrics and Gynecology. He completed an American Association of Laparoscopic Gynecologists (AAGL) fellowship in minimally invasive gynecologic surgery (MIGS), and he is also an Assistant Professor of Obstetrics & Gynecology at The George Washington University. He turned the “robotic gynecologic surgery” program at GW to one of the most successful programs in the US. For him, the place is not a key factor for success. Success depends on the person and not the place. “The only benefit America gave me was a bigger platform and more access to opportunities, I’m sure I would’ve succeeded even if I stayed in Lebanon.”

“I’m not talented, I’m not a genius and not a special person. I’m simply a hard worker.”

A small secret behind the success

The loss of his father, at age 16, was a major event that impacted his life. He found himself trying to overcome his grief and trying to be strong. It gave him a problem solving attitude. “Losing someone quickly turns your world into an unfamiliar place, I couldn’t let it take me hostage, I had to find a new identity that enabled me to pursue my dreams.” You will never succeed alone, It’s always about the team,” says Dr. Gaby. He believes that success is multifactorial. His family and friends always pushed him forward, his mentors and colleagues helped showing him the way.

Giving back to HOME

His love for Lebanon never faded, and giving back to the country was always a cardinal principle that he follows. In the pursuit of giving back, Moawad is currently working on to bring a surgical mission to Lebanon. This project will gather international surgeons who will come to Lebanon to help underserved and underprivileged women to get access to the highest standards of surgical care; “Access to healthcare is a human right, and should be for all, independent of their backgrounds, ethnicity, financial or social status.”

“When you reach the top, always remember to send the elevator back.”

Dr. Gaby’s message to the Lebanese youth: “Focus on your dreams and remember that hard-work is the key to success”. He also asks them to love their country: “A person without a country is like someone without an identity.” And make sure you give back and keep in mind that “When you reach the top, always remember to send the elevator back.”