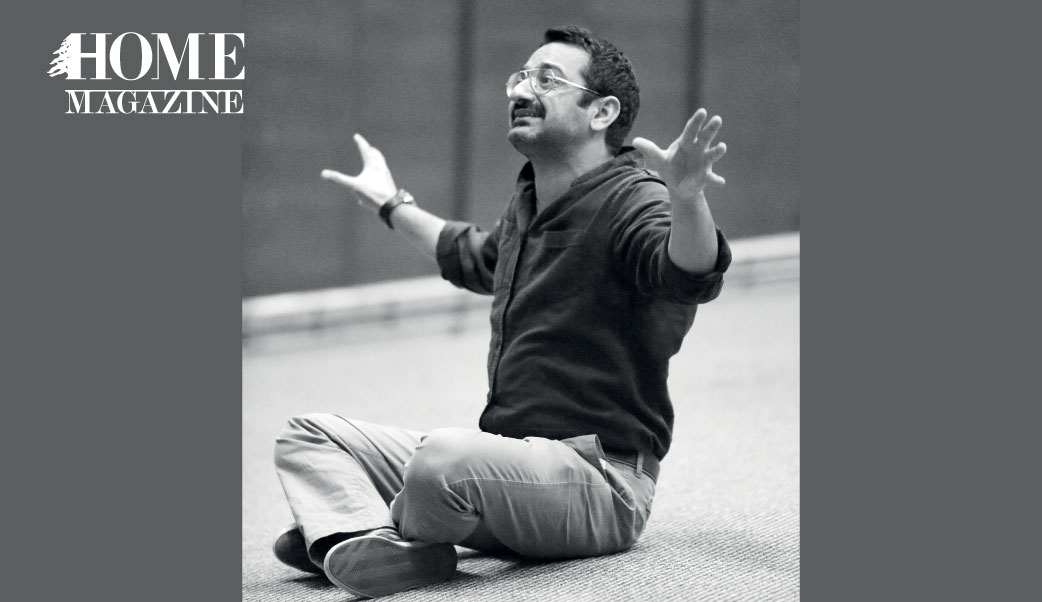 Actor, writer, director, comedian, musician, playwright, producer and theater professor in television, theatre and cinema—there are many appellations that follow the name of Georges Khabbaz.

Georges has been the lead actor in more than 25 television shows, including three sitcoms that he scripted and directed and which received top viewing records. He has also produced, directed and starred in 13 plays.

Georges has also won multiple awards for his acting: Rotterdam Film Festival (2008) for his role in Under the Bombs, and his play Kezzeb Kbir at the Festival de Molière in Paris (2007). He has won the Murex d’Or award several times: in 2004 for best sitcom Abdo w Abdo, in 2006 for best theatrical play Kezzeb Kbir, in 2008 for best overall artist, in 2011 for best actor in To Yara and in 2013 for best cinema actor in Ghadi.

HOME magazine recently sat down for a coffee with the multi-talented, award-winning thespian and wondered out loud if there is anything he couldn’t do.

Who are you really?

I am just a person in search of myself. Luckily for me, I work in a field that helps me in my search. I consider that I was born in a tough region, that is the Arab world, and I am trying to use my profession to combat the prejudices that exist in our area, such as intolerance, that leads to wars. Lebanon deserves peace.

What makes you tick?

Darkness under all its guises, be it oppression, unfairness, intolerance or ignorance, and violence.

How do you keep a balance?

I don’t really. I work 80% of my time. I am my work, I live my work, me and my work are not separated. We are one. Because I feel that I have a responsibility. We all have responsibilities as artists. Due to the number of people that we reach even more; especially through our movies, as this is the most far-reaching medium. I’m not talking only about myself; I am talking about all the moviemakers of my generation. We have an opportunity to show the true creative face of Lebanon.

If you had to choose only one thing to do for the rest of your life, what would it be?

I would write. Because writing is the basis for all my other works and without it I wouldn’t be able to do any of the other things. And it is the least demanding physically for when I grow old!

What is the one lesson you teach your theater students?

Freedom. You need freedom for inner peace. And freedom is obtained through art. I try to teach them, through art, to look at life with objectivity. I try to guide them so they may search for freedom themselves.

You’ve contributed so much to the Lebanese artistic and creative scene—what do you expect in return?

I still have a lot to give and I don’t expect anything in return. I used to. I used to want the applause, the appreciation, a sort of moral as well as financial compensation. Now that I am on a different maturity level I enjoy the moment, that one moment on the stage.

So what do you want to leave? What is your legacy? Your message?

I had wanted to leave a legacy but now I do not care to anymore. My message has been different at every stage in my career. In the beginning, I wanted to shine, to gain popularity. Then it became about creating my own identity. Now I have come to realize that art rests on three pillars: beauty, liberty and happiness, and they are related. When a child undergoing chemotherapy makes a special request to see my show, that is enough for me. I need nothing else. If you had asked me 10 years ago what is my legacy I would have talked until morning. Now I want to sow joy in people’s hearts. We are in need of joy.

You are a very private person. Would you say you were an introvert?

That’s a difficult question! What do you think? (I think yes.) To be artistic, to be able to give, you have to see within yourself. But I do not share my private life simply because there just isn’t that much to say. I am just a regular hard-working person. My work is much more interesting than me.

Love is very important to me and I am lucky to have it and to live it.

What would you tell your 20-year-old self?

Stay as you are. Don’t change a thing. Every stage in life is beautiful in its own way. And each is a learning process. I am who I am today because of my mistakes, so I wouldn’t change anything.

What is the one question you wish to get asked in an interview but never are?

(Pause) Why do you do what you do? Why are you in this tough industry? And the answer is that I did not choose this art, it chose me. I grew up in a very democratic household and I was lucky to have parents who appreciated culture and, although they were wary about me choosing this route, they nevertheless respected my decision.

Do you have regrets?

Not at all. There is nothing like art in the world.

Did you imagine your present success?

I always knew I wanted to act and do theater. I did not necessarily expect to  get this far. For the movie Under the Bombs I was compared by Paris Match magazine to Al Pacino! To be described by a prominent French magazine as “Al Pacinesque” and to have my movies written about in the international press is unexpected. But now I try to imagine a way forward. Now I’d like to see where I’m going, as far as I can control events.

How would you differentiate yourself from other artists in your field?

I try to create my own identity and I am affected by many artists, both local and international: Charlie Chaplin, Chouchou, Woody Allen, Nabih Abou El Hosn, to name a few. I am their student and they are my teachers, especially the Rahbani Brothers.

You are first and foremost an intellectual, a thinker. You are very unique in your ability to touch all layers of society. How do you manage to simplify your message?

Sometimes I take inspiration from Jesus Christ. When Jesus wanted to explain a principle to the people, he created short plays to get his message across. In this way, he simplified it.

There are three sides to art: entertainment, emotion and intellect. I try to play on all three planes. Each member of the audience takes what they want from a play, or a piece of art. Art is, in fact, for the masses. If you posit yourself as intellectually superior, you cannot get your message across and it creates a sort of cultural feudalism. Art should be popular, or at least it should have a popular aspect to it.

My goal now is to bridge the gap between art and the people. Compared to some European countries where the culture of the theater is deeply embedded, our bridge to this culture was built not so long ago and has been repeatedly destroyed by wars and invasions. We need to rebuild that bridge so it has the chance to get ingrained into our culture as well.

Tell us something about yourself that we don’t know already.

I am a perfectionist. I can also be very impatient and anxious, but these are also traits I need to be creative, so in a way they are a necessary evil.

What is your hope for Lebanon?

I am actually quite optimistic. I think all parties now agree that peace is important above all else. But of course, if we do not reach for our humanity, we risk falling back into the same trap.

“If we do not reach for our humanity, we risk falling back into the same trap.”

Name three things you think all the Lebanese have in common.

We need to teach our students to love art so that they may get in touch with their humanist side. My teacher used to say: “if you teach a child to draw a bird in its splendid detail, that child will never be able to hunt it.” We need to teach children the splendid side of humanity so we can learn to love and respect each other.