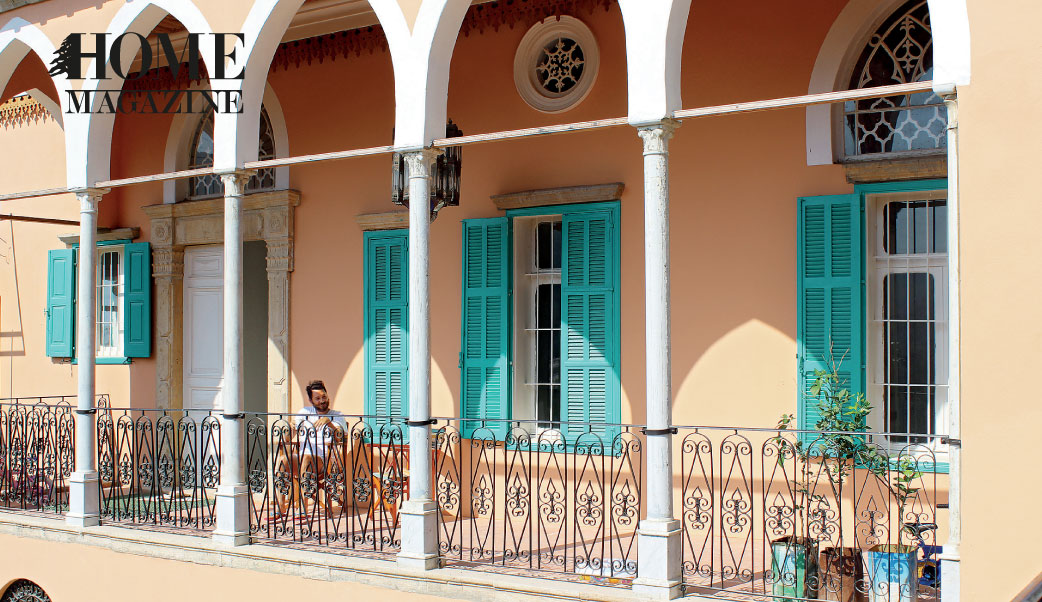 Henry Lucien began by coveting his ‘dream HOME’ but in the process he salvaged so much architectural heritage that he decided to open his house as a museum.

Henry Lucien leads the way through the narrow streets of Beirut’s Geitawi neighborhood, speaking as he does about his passion for “traditional” Lebanese three-arched houses and his love of living in such HOMEs. Then suddenly he turns around and says: “Here is my HOME.” The building in front of us is a late twentieth-century apartment block – not the anticipated sandstone, wrought-iron balconied wonder. “Look,” he says, “look.” I scrutinize the building, confused, and then I see it: right at the very top, the façade changes; there are the ornate railings and behind them three tall, narrow windows, each topped with an arch-shaped window. Lucien hasn’t sought out and saved an old HOME in Beirut; he’s transformed his newer dwelling into something from the turn of the previous century.

Although Lucien has lived all his life in Lebanon, he first entered an old Lebanese house just five years ago. It was at this moment that the 38-year-old artist discovered his passion for such HOMEs. “I saw another life,” Lucien says. “I fell in love – with the wind, the sky, the paintings.” He dreamily talks about the light and the air such houses were designed to embrace.

Lucien desperately wanted one of these HOMEs, but realized quickly that buying one was well beyond his means. Lucien’s main occupation and main source of income is his jewelry shop, Henry’s Handmade, in Hamra, where he sells unique pieces that he makes himself. However, all around him, old HOMEs were being knocked down to make way for modern developments. One day, he approached one such demolition site to ask what would happen to the house’s various components. Upon learning that they’d be sold, he bought the lot, and embarked on a project to build his “dream HOME, a castle!” – a much more affordable undertaking than purchasing an old HOME.

Lucien’s castle is not atop the Geitawi apartment block; it’s in Batroun, where it now stands nestled into the landscape as if it really has been there for more than 100 years. Rather than sandstone, the shell is contemporary rebar and concrete – “I love concrete,” Lucien laughs – but the marble balconies and columns, the railings, the windows, the doors, some ceilings and assorted other features have been salvaged from scores of demolished Beirut houses. Between the apartment in Geitawi and the house in Batroun, Lucien has used materials from some “65 houses.”

In a photo album, which we look through while sitting in the light-filled living room of the Geitawi apartment beneath the elegantly detailed ceiling, Lucien himself is in the process of painting; the jewelry maker has displayed images of many of the parts he used both at their original location and as they stand now restored and inserted into his new HOME. The album represents a wonderful record of a Lebanese heritage that is being eroded daily.

However, his passion for traditional living doesn’t make him a staunch anti-modernist.

Pointing to an image of an old, villa-lined Zeitounay Bay, he notes that, at the time of those villas’ construction, there were probably people who opposed them too, who said they were ruining the landscape, just as they do today when they see tower blocks rising. And yet, Lucien says, those villas represented progress.

Lucien intends opening the Batroun house as a museum. Those who visit will feel the unique atmosphere of a Lebanese traditional HOME. They will also, Lucien says, “see my experience, they will see my love… they will see my faith.”