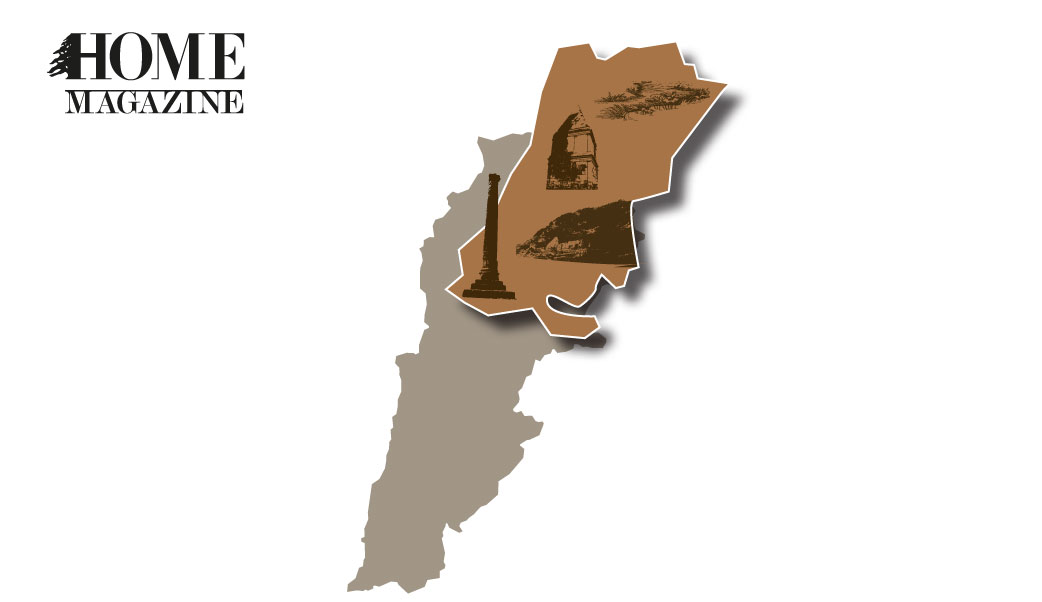 Stories heard about Hermel in the news might give us a false idea about the region; in fact, it has numerous archeological treasures.

Whenever we hear of Hermel in the news, it is about security issues and operations conducted by the Lebanese armed authorities. This Lebanese territory, located in the far north-eastern part of our country, has a long history revealed by archaeological research and remains. Let’s have a quick tour to discover the story and the history of this region…

It is a rich and fertile region, with the source of the Orontes River at Ain el-Zarqa, south of Hermel. There, it begins its journey then flows through Syria and Turkey before entering the Mediterranean Sea. The rebel river, also known as the upside-down river, courses from the South to the North – a quite peculiar journey.

The region has been occupied since prehistoric times. Evidence of archaeological industry dating back to 7000 BC was discovered on numerous sites, including El Qaa, Maqne, Hermel and Ras Baalbak. Tells – artificial mounds created by the accumulation of remains due to the occupation of the same site for generations – are scattered throughout the plain of Hermel. Stone tools were identified on around 13 sites. Dolmens – megalithic tombs that consist of large vertical stones supporting a large horizontal capstone – were found on different sites around Hermel locality. As for Labweh, archaeological soundings were conducted on the Southern Tell in 1966 and in 2011, thus allowing dating of the site’s foundation to 8000 BC.

The tells also revealed occupation during the Bronze Age period (3000 BC). But let’s move on to Nabuchodonosor II, the warrior Babylonian king who reigned from 605 to 562 BC. Lebanon is often mentioned in the chronicles of his reign, since his army encountered some difficulties in controlling and pacifying the region. Major archaeological evidence of the king’s presence in the Hermel region consists of two inscriptions and a sculpted relief representing the king – a bearded man wearing a long dress fighting against a lion. The inscriptions are located near Brissa, on the crossroads linking the Northern Bekaa to the Cedars, and down to the Mediterranean Sea. Translation of part of Brissa inscription (cuneiform system of writing):

“(…)I reached the mountains of the cedar trees with their enchanting scent that no other god had breathed in and which no other king had cut down, meaning to use them for our palaces and for the temples of our gods Nabu and Mardok (…)”

Kamouh el Hermel is an ancient pyramid located some six kilometers south of Hermel locality. This majestic pyramid that stands on top of the highest hill of the valley can be spotted from afar while driving around on the plain of Northern Bekaa on a clear day. The monument stands on a base with three steps made of basalt stone. The reliefs on the four sides depict different types of animals: deer, bears, dogs, wolves, boars and bulls. Diverse suggestions have been made regarding the use and the dating of the pyramid, but none is ascertained. The monument is thought to date from between the second and first century BC; some scholars suggest it is a tower tomb, while others defend the theory of a monument to the hunting prowess of royalty.

Column of Iaat – or Ya’at

During the Roman period, the region neighboring Baalbak witnessed the construction of a series of temples. Remains of those temples can still be seen in Ras Baalbek, Labweh, Brissa, Qasr el Banat and Nahle. One intriguing feature of the Roman period is the column of Iaat – or Ya’at. The column is 18 meters high, with a Corinthian capital, and stands on a four-step base in the middle of the fields. A cartouche on the sixth drum of the column could have unveiled the mystery that lies around the column, but unfortunately the plaque it held disappeared long ago, and with it any information related to this unusual monument.

One cannot pass by Hermel without hearing of “Qanat al ‘Achik” (the lover’s canal). The legend goes that a prince constructed this canal to win the heart of the princess he wished to marry. However, the canal is also known as Zenobia’s canal. It is widely believed in the region that Queen Zenobia of Palmyra (3rd century AD) had ordered the construction of an aqueduct to convey water from the Orontes’ source to Palmyra. Remains of such a canal were found on 140 km, linking the source located in Labweh to the city of Apamea in Syria.

Another place of interest is the site known as Deir Mar Maroun, a cavern located on a cliff some 90 meters above the Orontes River. The cavern is carved in the rock on three levels, while walls built with masonry blocks close the façade. Arrow slits can be seen in the walls, while evidence of the door frame, sills and grooves is visible when reaching the entrance of the structure. The inner part consists of numerous cells, while staircases link the three levels of the edifice. It is commonly believed that Mar Maroun and his followers resided in this monastery, while other theories suggest that the site was used to protect a convent for nuns of early Christianity that was located on the opposite cliff, of which there are no remains, known as Qasr el Banat.

The Orontes River flows beneath Deir Mar Maroun. Its main source, Ain el-Zarqa, lies some 200 meters down the ravine that surrounds the Deir. With its crystal blue waters, cascades and waterfalls, the Orontes has witnessed the evolution of mankind for decades. Humans tagged their names on monuments, believing it would last forever. Their only witness, the river, would whisper in their ears: “never forget that you are here for a glimpse of time.”