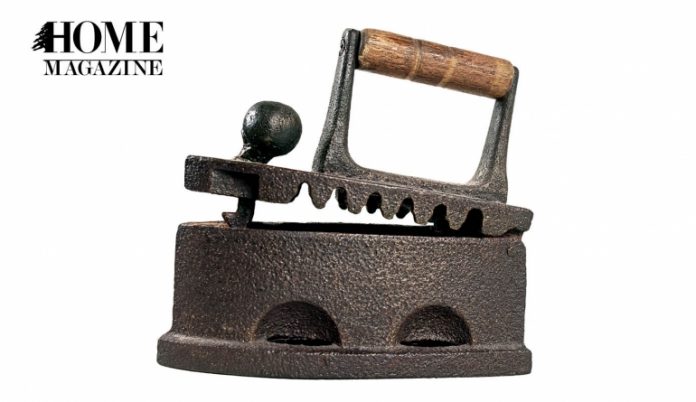 Would anyone nowadays wear unironed clothes? Our outfits are tidily washed, dried, ironed and well organized in the closet. What about out ancestors?

Does anyone imagine our ancient ancestors wearing their clothes – embroidered, dyed with the royal Tyrian purple – with wrinkles?

Techniques to straighten textiles are as old as textiles themselves. While early ironing tools were crude by today’s standards and only used for very special attire, now the iron has become an ordinary household appliance, light and effective, constantly improving.

From ancient times, until as late as the mid-90th century, tools made of stone, glass or wood were used to cold press the textile and straighten clothes in Northern Europe, according to Old & Interesting, a website that explores the history of everyday things.

Meanwhile, Greeks of fourth century B.C. began using a heated metallic object shaped like a rolling pin to put pleats in robes, says the How Products are Made website.

In ancient Rome, the fullonica, the equivalent of our laundry, was quite common. In Pompeii, some 18 washing workshops were identified, with presses used to iron clothes.

In first-century China, something that looks like our modern irons was invented.

A container made of brass and filled with hot ashes was applied to fabrics.

A similar iron showed up in Europe in the Middle Ages, when blacksmiths began forging them. They also made flat irons that were heated on a stove or over a fire. The same type of tool was utilized from the 17th century until the 20th century.

Even some of our grandmothers used a very similar appliance to iron clothes – a charcoal-filled triangular object with a handle and a flat base, made of cast iron. It was not ideal. The heavy iron, emitting smoke and dust, frequently caused burns and bruises.

“Techniques to straighten textiles are as old as textiles themselves.”

Daily outfits were not ironed until recent times, when electronic appliances made life easier.

“We used the irons mainly for shirts and pants – the ones worn for celebrations, not the one for the countryside, ” explained Alice, an 80-year-old woman from Mount Lebanon, bringing up memories from when she was 7.

“My father was in the army, and therefore we had an iron primarily for the military costume.”

Our neighbors used to borrow it from my mother,” she said.

Gas irons debuted in the United States in the 1880s but did not last long. They would become too hot and the gas sometimes leaked, according to the How Products are Made website.

In the 1920s, cords attached directly to the irons, and in 1926 steam irons were introduced. The steam irons has a problem of rusting plates. That was corrected with the development of aluminum alloy, and further improved in the 1990s with the innovation of nonstick coating, says How Products Were Made.

Maybe new robotic technology will solve the last big problem – who will do it!