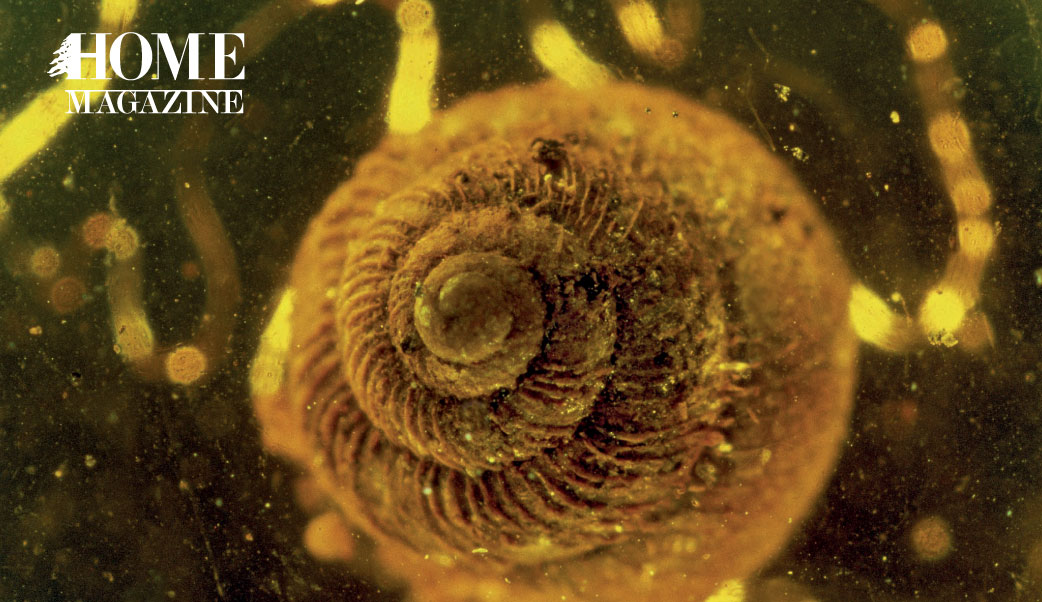 Having these words in passion said

Wine, which by its taste confessed

The grape from whence the juice was

With its variety of color gradient ranging from white to dark red and its translucent texture, amber has been appreciated since the Neolithic period (some 7,000 years ago) and was used by early humans in jewelry and in decorative objects.

Amber is a fossilized tree resin hardened and preserved in the earth’s crust for millions of years. Famous as a gemstone, amber has become a color reference, located midway between gold and orange.

The beauty of this fossilized resin is far from being its only interesting feature: it has scientific importance due to the insects and microorganisms that were stuck in the resin – and thus can be studied today to uncover the mysteries of our past; of our evolution. Recently, a once-in-a-lifetime, very unusual discovery was made in a piece of amber from Myanmar destined to be made into jewelry: the tail of a 99-million-year-old dinosaur was found trapped inside. Scientists were able to identify the finest details: full sections of vertebrae, and mummified skin and feathers still with their pigmentation; thus they were able to ascertain the appearance of the dinosaur.

Amber. A time capsule, a window that takes us back to the faraway past, to the early Cretaceous – some 135 million years ago. Geographically, Lebanon was then positioned close to the equator, to the south of its current location. A dark and dense tropical forest covered the territory. Arborescent ferns, conifers and the first flowering plants grew in this forest. Fairly high temperatures and a humid climate favored the appearance of many insect species, reptiles and arachnids. Pterosauria, a flying piscivores lizard measuring 1.30 meters, dominated the sky, while Brachiosaurus, a long-necked herbivorous dinosaur, measuring up to 25 meters long, roamed in this forest, along with other creatures – all long extinct.

The importance of Lebanon’s amber resides in the fossilized insects trapped in the resin. Butterflies, lizards, scorpions, snails and spiders were stuck in the resin, sometimes in quite odd situations – like mating! Lebanese amber allowed fauna and flora to be inventoried, and the paleoenvironment from the past to be simulated.

“Lebanese amber is the oldest amber discovered to date, with intensive biological inclusions.”

Lebanese amber is renowned worldwide for the importance of its inclusions and it is considered to be of high scientific value. About 8,500 biological inclusions have been found up to now in the amber from different outcrops.

The preservation of the biological inclusions in their minute 3D detail is quite unique, allowing paleontologists to better understand ecological phenomena from the past and the history of our environment’s evolution. Crucial information was collected in regard to some of the oldest sampled ecosystems.

Moreover, outcrops of amber dating to Late Jurassic (160 million years ago) have recently been discovered in the volcano-basaltic soil of the northern part of Mount Lebanon: El-Ghineh, Tannourine, Bekaa-Kafra and Hadath El-Joubbe. Paleontology Professors Dany Azar and Raymond Gèze, from the Department of Natural Science, Faculty of Science at the Lebanese University are researching and studying these new discoveries, which are shedding more light on the ecosystem and geological formations since the Late Jurassic. Raif Milki, Professor of Public Health at the American University of Beirut, is a pioneer in the process of collecting amber, which has not been without its perils for him, since his field trips during the civil war period were often located in areas known for their lack of security. In 2001, he published a book with Georges Poinar titled Lebanese Amber, the Oldest Insect Ecosystem in Fossilized Resin, which covers the major aspects of Lebanese amber.

Further research might reveal even more outstanding discoveries. Lebanon’s earth crust might not have yet revealed all its treasures.