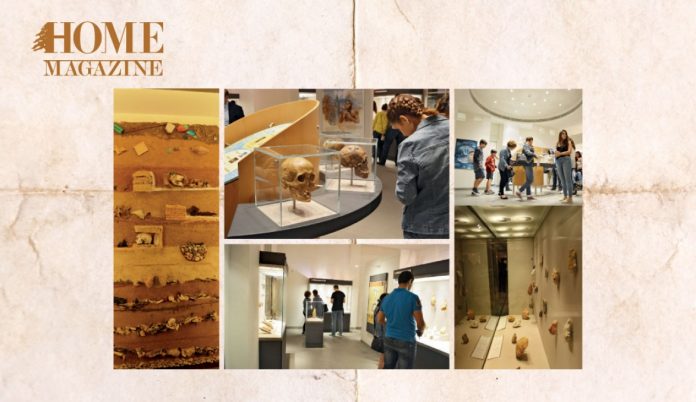 Discovering the mysteries of prehistoric Lebanon

Located inside a Jesuit residence in the heart of Beirut, lies a museum that tells the story of the first humans that occupied the territories constituting our country today. The museum opened its doors in 2000, as part of the Saint-Joseph University of Beirut. The museum aims at promoting the prehistoric heritage – the oldest one, and educating visitors on the conservation and protection of this period in our history which marks the presence of the first humans on the Lebanese land. This is an important task since the sites are disappearing due to the increase of urbanism. It also aims at introducing people to the work of the Jesuits, pioneers in this field.

The Museum of National Prehistory is the first museum in the Middle East to display objects of the prehistoric life. When we talk prehistory, we go back one million years. More than 400 sites in Lebanon have revealed the presence of prehistoric humans. Those sites have revealed artifacts from the first life on this land that illustrate the lifestyle of the hunter-gatherer and their evolution to the invention of agriculture and domestication of animals – which led to the settlement of the human species.At the end of the 19th century, the Jesuit priests started studying prehistory in Lebanon. Through surveys, they gathered an exceptional collection constituted of flint tools, human and animal bones, pottery and jewelry from sites all over Lebanon: Tripoli, Antelias, Ksar Aqil, the sands of Beirut, Minet Dalieh, Adloun, Joubb Jannine, Labweh, among other sites where such artifacts were found.

“The Museum of National Prehistory is the first museum in the Middle East to display objects of the prehistoric life.”

The collection is displayed on two levels. On the first level, the visitor will discover different elements of the daily life during prehistory: pottery, fire, etc. Different skulls show the evolution of the prehistoric human morphology. A restitution of an archaeological excavation stratigraphy illustrates the artefacts found and studied by archaeologists and the different periods of occupations of the same land. On that floor, visitors will also explore the tools used during prehistory: the selection of raw material, how flint tools were made, and the way they were used. In one of the showcases, the flint tools are related to modern ones, leading to a better understanding of the prehistoric habits. The second level is dedicated to lifestyle of our prehistoric ancestors. The exhibition highlights objects related to the invention of agriculture and the domestication of animals. One area shows the process and the materials of the various stages for bread production, another one displays models of dwellings. Two cases are dedicated to objects uncovered during the recent excavations in Labweh, north of Baalbeck.

Three main themed workshops upgrade the visit: the tools, the hunt, and the invention of agriculture. These workshops take this experience to another level, granting the visitor a sense of deep understanding of our ancestors’ way of life.