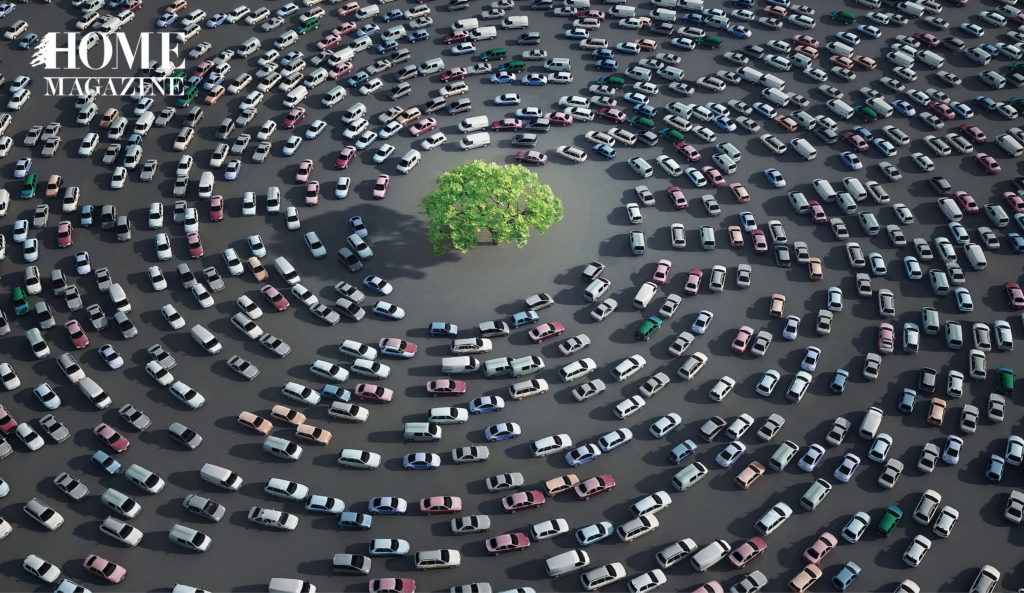 Spotting the problems that bemoan the average Lebanese is easy. While many complain about poor driving etiquette and lack of green patches in this concrete jungle, few have noticed the connection between both problems.

A taxi driver tells me, “It’s not the traffic, it’s the people.”

Using his prayer mat to block the sun (and his view), my driver turned to the familiar self-deprecation that many Lebanese express toward their own culture. “Even if we had public transport, no one would use it,” he says. “We all have big heads! We think we are all prime ministers who need a black Mercedes.”

Self-centred behavior in public cannot entirely be blamed on traffic. I argue that there is a link between public space (or lack of it) and widespread cultural attitudes toward driving.

Public space and public transportation enable interaction between people from diverse geographic, ethnic, and socio-economic backgrounds. Their availability is crucial toward fostering tolerance of diversity, patience, shared usage, and civic responsibility. Syrian architect, Marwa al-Sabouny, argued that poor urban planning and a lack of shared space contributed to the outbreak of the Syrian conflict.

Arab cities are often characterized by communal divisions along religious and/or ethnic lines, or based on waves of displacement. Learning which neighborhood someone is from often helps to determine their status and who they associate with. Without reliable public transportation, city-dwellers must depend on taxis or private cars to move around Beirut, limiting social interaction with others.

Limited common areas further alienate the masses from interaction by pushing them into privatized venues. According to UN-Habitat, public spaces make up about 2 percent of modern Middle Eastern cities compared with 12 percent of European cities. Corruption, developer greed, poor urban planning, and denying the public the right to protest all contributed to this reality.

Class is probably the most pronounced division in a city as privatized as Beirut. The wealthy are sheltered from the rest of society; they can afford to spend their lives shuttling between private spaces, as well as open spaces such as country clubs, luxury hotels, private beaches and villas. Many of the newly built public spaces, such as Downtown Beirut, are occupied by luxury boutiques and high-end hotels, and are designed exclusively for the wealthy. As a white foreigner, I often raise eyebrows among middle to upper class by mentioning that I catch the bus — an unusual choice for a privileged individual.

The dichotomy between public and private is seen in the way people treat their own property and shared space. While pride in the cleanliness of the HOME is common, the lack of communal responsibility for public space is stark and is another instance of missing civic responsibility leading to an attitude of, “If it’s not mine, then it’s not my problem.”

Status-chasing is widespread. As my driver’s remarks suggest, cars are strongly linked to status. This is a widespread phenomenon of restaurants and clubs employing valets in an attempt to give customers a feeling of exclusivity and special treatment.

Status is not only expressed through upward ambition, but also by talking down to one’s social inferiors; doormen, domestic workers, waiters, janitors, garbage collectors, and laborers the most noticeable targets. Such positions are often filled by imported labor and reflect a well-acknowledged reluctance by many Arabs to do menial work. In a country with nearly 25 percent unemployment (approximately 40 percent for youth), around 50 percent of Lebanon’s workforce are foreigners, mostly Egyptians, Syrians, Ethiopians, Filipinos, and Sri Lankans.

The notoriously poor treatment of these workers in the region reflects a social pecking order, which differs with each state’s history and circumstances. Generally, poorer Arabs like undocumented Palestinians, Egyptians, or Syrian refugees sit only slightly above non-Arabs in social ranking and respect. Domestic workers and building caretakers are also often those tasked with errands in the street and neighborhood, and experience “high levels of harassment due to prevailing and erroneous stereotypes, with Sri Lankan and Philippine maids facing more severe harassment,” says researcher Myriam Ababsa, Ph.D.

Sexual harassment though is a more diffuse phenomenon in Arab public space. Arab streetscapes vary widely, with Lebanon showing the highest tolerance toward women in public space. Yet nowhere are women able to walk around unburdened by the threat of harassment.

Old Arab cities display housing patterns where open space is enclosed within internal courtyards behind high walls, with few or no windows. These courtyards often were and remain the domain of women and children, who are able to exist freely without interacting with strangers and men. According to Ababsa, this bit of history helps to explain the prevalence of sexual harassment in public space which, according to this mentality, is still considered the domain of men.

The same applies to public transportation which women more readily avoid than men due to sexual harassment. The absence of physical spaces where women can claim their own stake in public life is a major obstacle toward improving gender dynamics.