Homeoflebanon
ISSUES
Issue No. 10
Roots and Routes: A Swedish-Lebanese Tale of Exile and Belonging
ISSUES Issue No. 10 The Voice of the Diaspora 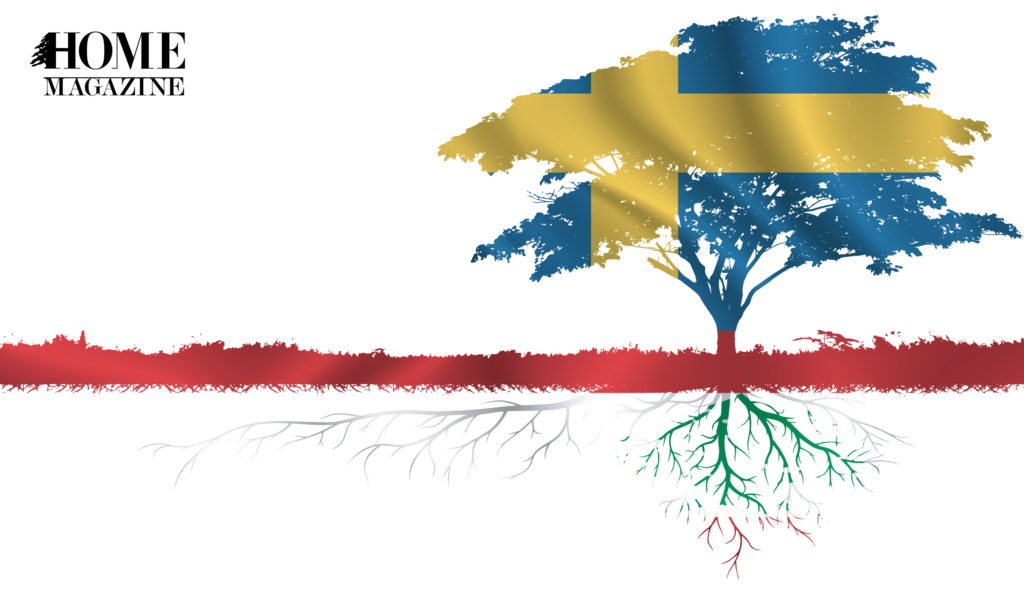 My first contact with Sweden was through the film Scenes From A Marriage by the “demon director” Ingmar Bergman. The projection took place in one of Beirut’s smaller cinemas. Not surprisingly, we were a handful of people sitting stuck to our chairs. There was some kind of enchantment over the characters in the movie, we couldn’t help but notice their natural charisma, their rhythm, their beauty, their laziness. Five years later, I came to Sweden. Small red cottages, strawberries, high buildings in the middle of the forest, the play of Nordic light, order and discipline, no poverty — it was a country that worked according to the recipe. The direction was set, the goal was close: It was former Prime Minister Per Albin’s HOME in 1920 and there was room for everyone, Swedes as well as foreigners.

A century later, the question is all the more relevant: Is Sweden still considered the people’s HOME ? Remarkably, 1920 designates also the birth of Le Grand Liban, my country of origin that I and many like myself emigrated from because of the Lebanese Civil War that began in 1975, a war that left anyone indifferent. I remember when our house was hit by a grenade and fell apart. I went there to check the devastation. Two things struck my attention: a cracked water pipe causing the water to flow through the small holes caused by shrapnel, and withering or burned leaves reminiscent of the cartoon series The Adventures of Tintin. Over 40 years later, Lebanon is still suffering from water shortages — let alone access to sustainable and progressive education.

Moving to Sweden was a real challenge, to say the least. It was a mix of delight and anxiety, like a Bergman movie. After barely a week’s stay, I discovered, to my surprise, that being away from HOME, alone, meant far more than being dispossessed of your country. On the way HOME from a disco in a wealthy neighborhood of Stockholm, I met an unconscious young blond woman on a warm summer evening lying by the curb. My first reaction was to rescue her or at least ask for help. Suddenly, a man appeared from the corner next door, looked at me briefly and muttered a few words. I understood from his body language and tone that I should take care not to get close to the seemingly drunk woman. Just a few minutes later, I hear the loud, wailing sound of an ambulance approaching followed by a flashing police car that stops right in the middle of the nearby intersection to secure the ambulance’s expressway. It was all over in a matter of minutes. Meanwhile, I couldn’t help but notice how vulnerable and abandoned that woman was. In retrospect, I realize that loneliness, even more so today, is a common disease that is seemingly more difficult to handle in the most developed welfare societies in the world.

The rain whipped hard when the aircraft’s deck touched the runway of Stockholm Arlanda Airport on this cold spring day. It was a quite shocking scene because June had always meant cool baths and summer holidays. Nevertheless, I managed to glimpse gorgeous expanses of greenery from my window. My first stop was Rinkeby, a suburb of Stockholm, where my mother’s cousin lived. This neighborhood was cursed with news reportage about crime and deviant social behavior. In fact, people were no worse than elsewhere. One could maybe criticize their alarming lack of interest in the Swedish language and lifestyle despite a series of measures put in place by the authorities. For instance, in the 1990s, the concept of motherhood was no longer found in the discourse. The Swedish immigration agency replaced the exclusive word “foreigner” with the more welcoming “immigrant.” The motto “equality, freedom and cooperation” was also coined. Sweden had marked the way to the future and assumed that everyone wanted to follow — regardless of class, gender, religion, or citizenship.

According to my experience, however, this optimistic community spirit revealed only one side of the coin. When I was married to the mother of my children, a woman of bourgeois upbringing, we often encountered sensitive topics that would result in bitter barbs among us. I learned a great deal about self discipline then. In any case, it is far from easy to agree on things that are sensitive like child raising, teenage crisis, school education, religiosity to name but a few examples — even when both parents share the same cultural background.

As the years went by, I became all the more aware of my native language and cultural expressions.

Ethnicity was not just a futile exoticism as mainstream Swedish culture would have it. A major concern was to search for those “cultural invariants” within me — facets to which I hold dear and refuse to compromise on. As an immigrant I cannot but reflect upon the process of alienation and (re)discovery of self. Put differently, I am constantly embattled between positions. First as a Christian in a predominantly Arab- Muslim environment, next as a Greek descendent living in Lebanon, and then as a Greek-Lebanese immigrant living in Sweden. The Indian-British author Salman Rushdie is perhaps more appropriate to articulate the physical and psychological distance from familiar milieus.

Our identity is at once plural and partial. Sometimes we all fall between two stools. But however ambiguous and shifting this ground may be, it is not an infertile territory for a writer to occupy. If literature is in part the business of finding new angles at which to enter reality, then once again our distance, our long geographical perspective may provide us with such angles (Imaginary HOMElands, 1991, p.15).

When I studied social science in the mid-2000s, I was struck by the consistency that prevailed over centuries of Swedish history between the people, the church, the popular movements and social democracy; society was characterized by puritanism, consensus and non-violence. In short, the exact opposite record of my HOMEland Lebanon, which is a tiny country embedded in a conflict zone known for its communalism. So far, society in Lebanon has not been able to manage its heterogeneity and the question is whether it will ever make it. As far as I am concerned, it was in Sweden that I learned that cultural differences could pave the way for a deep understanding of self and others. In fact, this growth remains a work in progress.

Nowadays, I am increasingly attached to a somewhat romanticized image of Lebanon. It is mostly the pride of its mountains, the fresh and dry air, the serene atmosphere, the sacrality of the trees and particularly The Cedar tree, the constancy of the rocks and the overwhelming silence of the inherent deities. I will wrap up my story with a reflection inspired from this scenery: We are often uprooted and then take root again. We can plant the seeds of our existence where we want. What interests me in the tree is its branches. It is this freedom to develop to take unexpected, incomplete, and unpredictable paths.

Writing an article, dedicating a painting, or composing a piece does not solve the question of identity. The latter is elusive and indefinable. Identity, for me, is not singular but multiple. I am that mosaic of things: Lebanese, Swedish, Greek, Armenian, and Turkish. I believe that we should have the widest possible vision of identity and let it be free and plural.