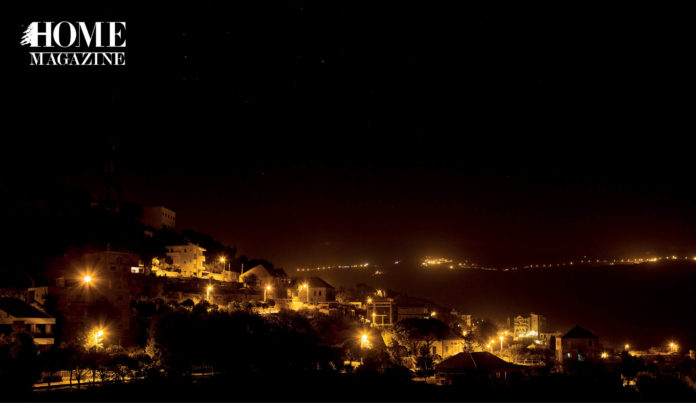 While the primary building block of Western society can be said to be the individual, for Lebanon it is the family. And by family, I don’t just mean the husband, wife and children, or even a rich extended family of cousins, aunts, uncles and grandparents. For the Ma’luf family in particular, it extends back to Yemen some 2,000 years ago and has expanded to the many countries where family members have emigrated since the 19th century. It is this strong sense of family identity that has led to the selection of the Ma’lufs as the first Lebanese family to be featured in HOME For Magazine, to be followed by other families in future issues.

It should be noted first that one of the complications of tracing families from Lebanon is that the original name is written Arabic ( معلوف ), but when Lebanese emigrate to non- Arab countries, it must be rendered into their alphabet, a process called “transliteration.” There is a standardized transliteration system used by most scholars, established by the U.S. Library of Congress. It renders the name into Ma’luf, which is why we are using that form of the name here. But common practices of transliteration are complicated by the fact that different languages pronounce their letters very differently. For example, “ و“ in Arabic is usually written “ou” in French, but “u” or “oo” don’t even exist in most languages. In addition, some people incorporate the article “the” ( ال ) transliterated as “al” or “el”, with or without a dash, into their name. This partly explains why there are at least 25 variations of the Ma’luf surname used worldwide: Al-Maalouf, Malluf, Maa3louf, Maaloof, Maalooff, Maalouf, Maaluf, Maaluff, Mallof, Malloof, Mallouf, Malof, Maloff, Maloof, Maloofakis, Malooff, Malouf, Malouff, Maloufi, Maloufos, Malov, Maluf, Maluff, Melof, Meluf and Molof.

In addition to those complications, many branches of the family have broken off, often choosing the first name of an ancestor a few generations back to be their last name. The organization Maloofs International, Inc. lists 165 “family names who, through research, we believe were originally Maloofs.” In further acknowledgement of this problem, the organization welcomes people as full members “if your name, a parent, a grandparent or greatgrandparent’s name is Maloof or one of the variations – if you are born into one of the families who originated from the Maloofs or related families.”

The existence of the website for Maloofs International, Inc. (http:// www.maloofsinternational.org/) is another affirmation of the sense of identify the family has worldwide. The organization not only has a website, but also a regular newsletter and two annual family reunions that attract Ma’lufs from around the world, currently held in conjunction with conferences of the Southern Federation of Syrian Lebanese American Clubs. 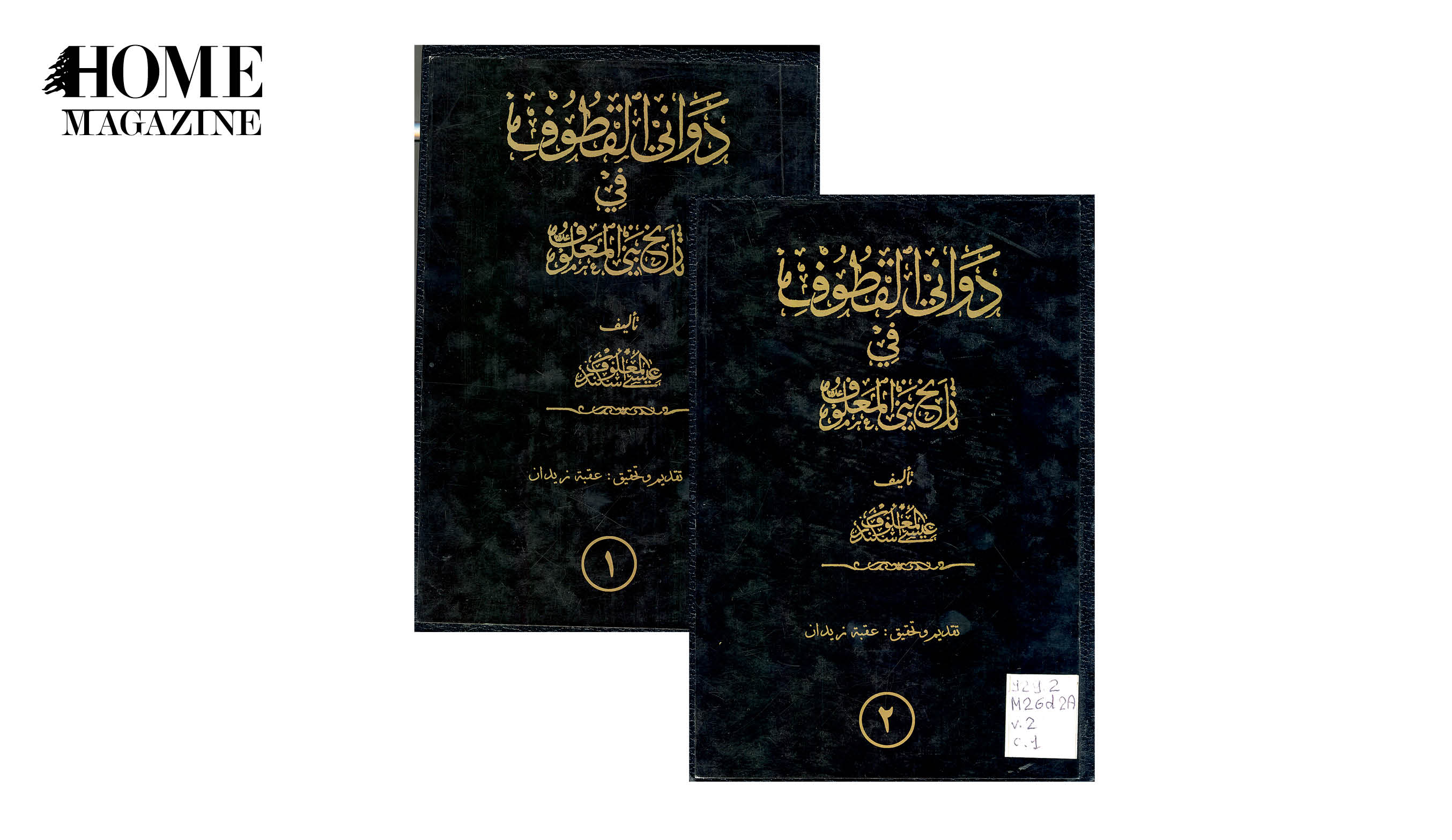 The primary historian of the Ma’luf family was ‘Isa Iskandar al-Ma’luf (1869-1956) who wrote many historical books including “ دواني القطوف في تاريخ بني معلوف ” (Doany Alqtov in the history of the Maalouf) – an 800 – page history of the Ma’luf family published in 1907. George Hanna Malouf of Hereford, Texas, a published author, scholar and poet, published “Maloof, The Ghassani Legacy” in 1992 which includes a complete translation of the original manuscript of ‘Isa Iskandar Ma’luf, as well as the Maloof coat of arms (with explanation), plus a Maloof family tree showing its seven branches, and genealogical information on current Maloof families. It has been followed by a book by Charles Malouf Samah of Florida, who wrote “A History of the Malouf People of the Min’em Malouf Sub-branch, Including a History of Zabbougha, Lebanon, the Birth Place of the Min’em Malouf Progeny” published in 2005. A more personal Ma’luf history was written by the well-known author Amin Maalouf called Origins, which traces his own family back many generations.

History of the Ma’luf Family

The Ma’luf family traces its history to Yemen where the family was part of the Ghassanid tribe that emigrated from Yemen to Houran in what is now Syria after a major flood of the Ma’rib Dam, some say as early as AD 102. While historical accounts differ in regard to when the Ghassanids converted to Christianity, it is most likely that they first converted in the Houran, since the current evidence of Christians in Yemen dates back only to the beginning of the sixth century. The Ghassanids governed the Houran area until the Islamic conquest in AD 637.

In 1519, Ibrahim Ma’luf (nicknamed Abi Rajih) and his family left Houran for the mountains of Lebanon. Of Ibrahim’s seven sons, the families of Issa, Medlej and Farah retained the surname of Ma’luf, whereas the other branches adopted other surnames. In 1560, these three families, who were living in the village of Mhaydse, received permission from the ruling emir to relocate their HOMEs across the valley where they established the village of Kfar’aqab (Arabic: كفر عقاب – pronounced “Kfar’a-ab” in Lebanon). Kfar’aqab thus became the core settlement of the Ma’luf clan. From Kfar’aqab, some members of the Ma’luf clan migrated to Zahlé and Niha in the Bekaa Valley, to ‘Ain el Qabou and eleswhere in Lebanon – and others emigrated to the U.S., Brazil, Australia and many other countries. While they were originally Antiochian Orthodox in Houran, many of the Ma’lufs converted to become Melkite Greek Catholics from the 18th century, and a smaller number of Ma’lufs became Roman Catholics, Maronites and Protestants. 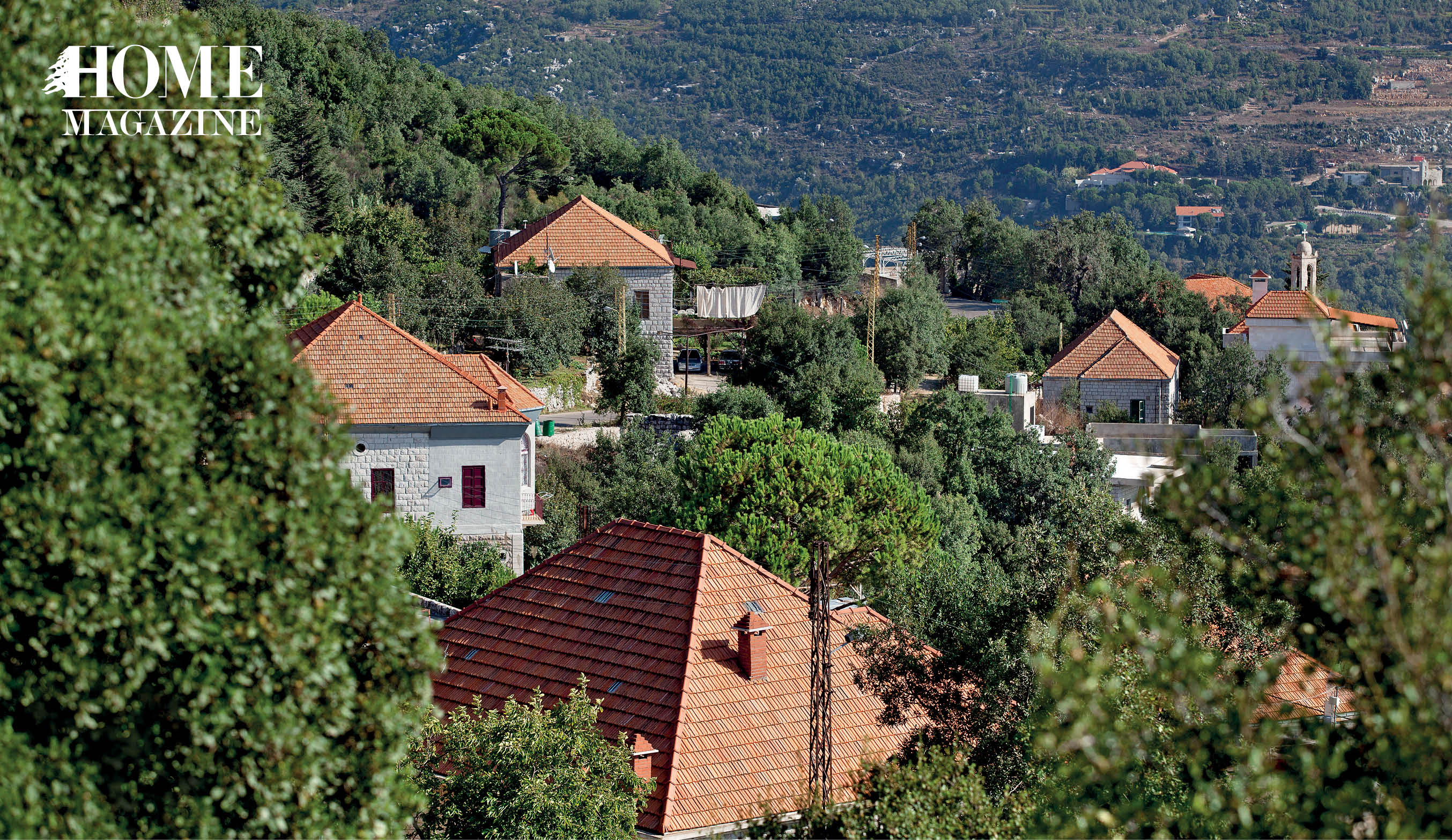 Genealogies of the Family

An important aspect of most families who treasure their heritage through many generations is a genealogy or family tree. This has been complicated for the Ma’lufs by the variations in spellings and names. ‘Isa Iskandar al-Ma’luf was able to minimize the problem since his genealogy was in Arabic, but those who write it in Latin script have to decide on whether they try to account for all the variations in spelling, or use only one in the genealogy to allow for easy searches. Since siblings and even the same person often spell the family name in many different ways on different documents, it is usually best to adopt one spelling for the genealogy. This is especially important if one objective is to try to link the family with major online genealogy sites and especially Geni’s World Family Tree of over 89 million names. Thus, for example, Geni’s website (https://www.geni. com), has 135 Maalouf profiles and 124 Malouf profiles, but these cannot be integrated together due to their variations in spelling. In the genealogical records of the family, some fourteen generations separate today’s generation from their common ancestor Ibrahim Ma’luf, who moved from the Houran and established his family in Lebanon in 1519.

Notable Members of the Family

As for notable people in the Ma’luf family, the list is very long and includes a large number poets, authors, musicians and politicians. Probably the most well-known worldwide is the prolific author Amin Maalouf who has lived in France since 1976.

He was elected to the prestigious Académie Française in 2011, and was subsequently honored with Lebanon’s National Order of the Cedar medal with the Rank of Grand Cordon, bestowed upon him by Lebanese President Michel Sleiman.

Amin Maalouf’s brother Nassim Maalouf also moved his family to France because of the Lebanese Civil War, where he became an acclaimed classical trumpet soloist who adapted the trumpet to Arabic music. His son Ibrahim Maalouf has become a very accomplished trumpet player and composer who has performed in a wide range of musical styles, including jazz and classical music, as well as Arabic classical music and improvisation played on the quarter tone trumpet”developed by his father. He has earned prizes in some of the most important trumpet competitions in the world, and in 2014 he was awarded Best World Music Artist at the French Music Awards.

Sam Maloof (who passed away in 2009) was a renowned designer and producer of furniture, and is considered one of the finest woodworkers of our time, with some of his works in permanent collections at the Boston Museum of Art, the New York Metropolitan Museum of Art and many other fine museums. The Sam and Alfreda Maloof Foundation for Arts and Crafts was established in 1994 to, as their website, Maloof foundation. org, says, “perpetuate excellence in craftsmanship, encourage artists and make available to the public the treasure house the Maloofs lovingly created.”

Elias Maalouf, who grew up in Ecuador, plays a leading role in Lebanon to restore its train heritage. His family comes from the railroadcentered town of Rayak, and both his grandfather and great-uncle worked for the railway, so it is understandable that he chose to make a documentary about the Lebanese railway for a student project in film production. The project turned into a passion for documenting and preserving Lebanon’s railway history, and promoting the revival of rail travel in Lebanon through the organization he co-founded called Train-Train (www. traintrainlebanon.org). 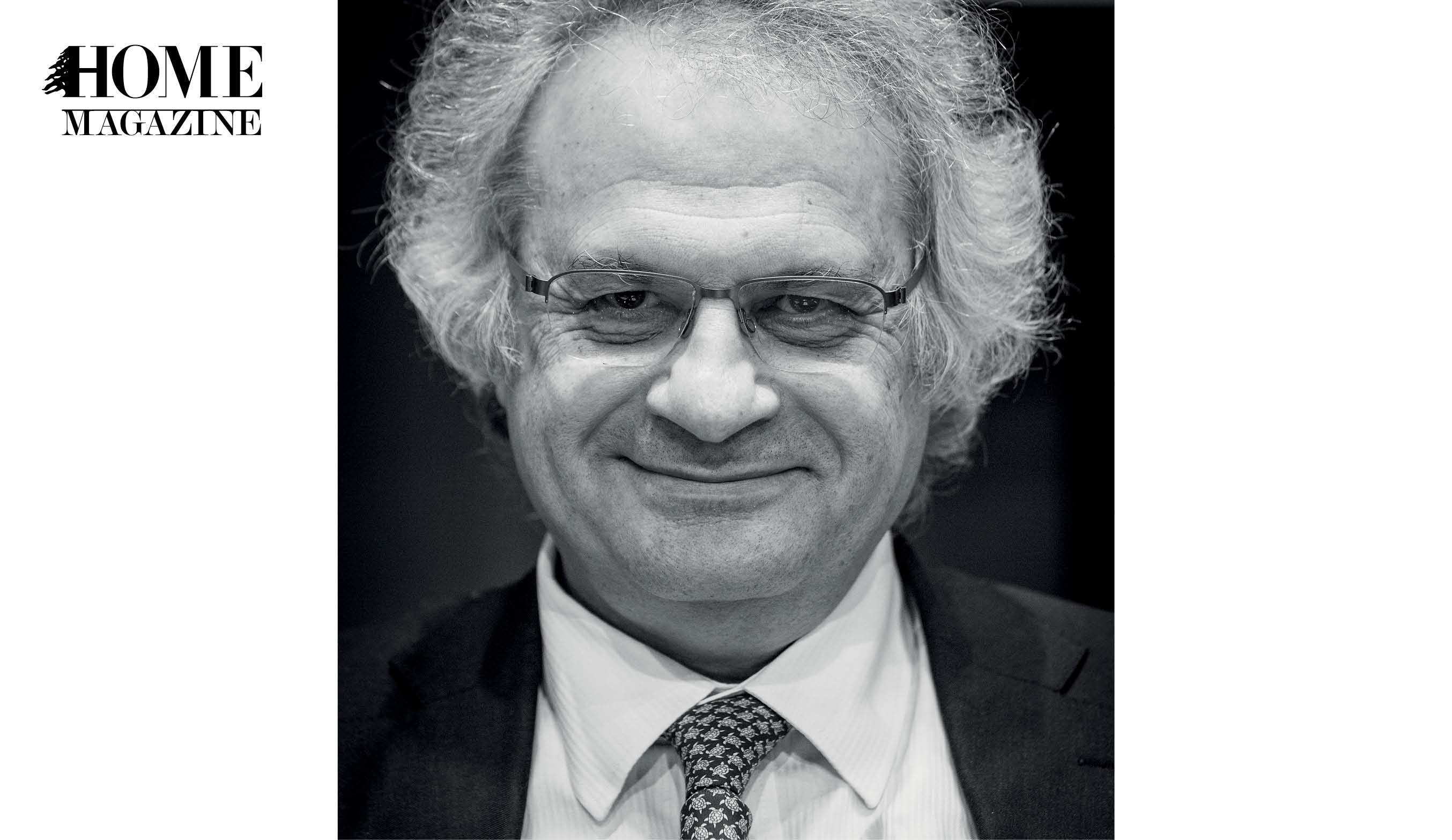 Other notable members of the Ma’luf family worldwide include:

Not all people with the Ma’luf surname (however it is spelled) consciously identify with their shared family heritage or even with their Lebanese heritage. Thus, I could not find any reference to Lebanon in the website or subject matter of David Malouf, the author in Australia or on the website of Sam Maloof, the master wood-furniture maker in California, though that does not mean that either of them are unaware of their heritage. As with all emigrants worldwide, some identify with their heritage while others assimilate so effectively that they have little or no connection with their cultural past. That is especially true for later generations whose Lebanese connection is diluted by time, distance, lack of contact and intermarriage with people from other heritages. Nevertheless, it is likely that the Ma’lufs as a whole probably have more of a conscious identity with their surname and its history than any other Lebanese family, with a genealogy that goes back 14 centuries, published historical records, archives, poetry, websites and international family reunions on a scale that would be hard to match.

I would like to thank the following sources for their contributions to this article:
• The library and archives of the Lebanese Emigration Research Center at Notre Dame University-Louaizé, Lebanon
• The library and archives of the American University of Beirut, Lebanon
• Maloof’s International, Inc. (both its website http://www. maloofsinternational.org/ and correspondence with Lori Malouf Coronado, its secretary/treasurer/ newsletter editor.
• Interview with Elias B. Maalouf, president and cofounder of Train/ Train Lebanon
• Wikipedia – many different articles

Other websites online providing information on the Ma’luf family, the Ghassanids, Yemeni history, and other related topics. 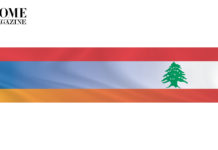