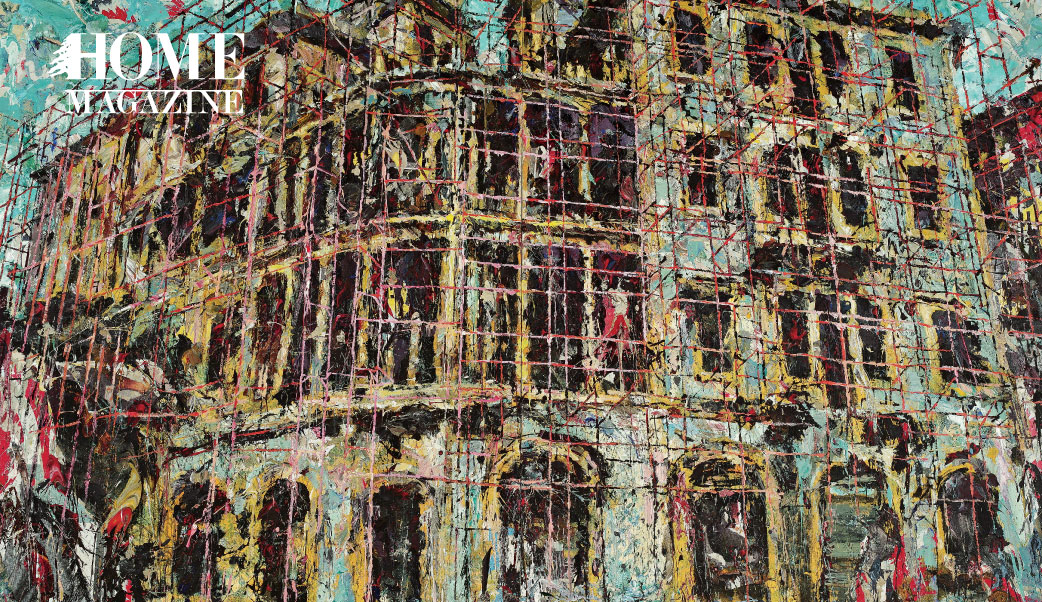 Ayman Baalbaki is the face of contemporary Lebanese art. Born in 1975, in Odeissé, Lebanon, he has won the hearts of critics, galleries, museums, and collectors across the globe. In March 2014, “Babel” was sold at auction at Christies for $485,000. His work boldly forages into the depths of war, destruction, escape, politics, defiance, and cynicism. Different aspects come together to create mesmerizing beauty that haunts the darkest recesses of the mind. Welcome to the unique canvas of Ayman Baalbaki’s world.

From his spacious studio above Costa Coffee in bustling Hamra, Beirut, Ayman Baalbaki draws on his diverse sources of inspiration. The rhythmic yet impactful words of Mahmoud Darwish. The nomadic spirit and explorations of identity in pre-Islamic Arab poetry. Flashing memories of the lived past. Glimpses of history such as the U.S. battleship from 1984. Socio-political tensions. And reflections of the present. This comes as no surprise given his upbringing. Raised in a family of artists, Ayman Baalbaki’s youth was marked by “the smell of turpentine, conversations about left wing politics, and reciting Arabic poetry.”

” ‘HOME ’ is still confused in my mind. Permanence has no place.”

Baalbaki credits his family as a major influence in shaping his artistic technique and eye: “my uncle, father, brother and cousins are all artists. Other family members are artistically inclined too. Before I studied at the Lebanese University, my foundation in art was already there. Marwan Kassab-Bachi, the late Syrian artist, is another noteworthy talent I hold in high esteem. My studies at École nationale supérieure des arts décoratifs in Paris and the rich art and culture scene of Paris had a great impact on my art too. So ultimately nature and nurture made me the artist I am today. As did the realities around me.”

And these realities come to life on his large-scale canvases. The series of apocalyptic demolished buildings with ironically bright floral buildings after the 2006 Lebanon War tell a tale of sudden destruction and the people caught up in the midst of all this turmoil. “During the civil war,” muses Baalbaki, “destruction was gradual, one bullet hole at the time. But during the July War, it was swift. The floral backgrounds are inspired by clothes hanging to dry on balconies. The sort of colorful fabrics donned by farmers and regular people who were forced to leave their HOMEs.”

“Lebanon is the people is him.”

In fact, the theme of displacement is always lurking. After all, Baalbaki is no stranger to fleeing from conflict and danger. “I was born a refugee,” he comments, “moving from place to place in Lebanon because of the Civil War and later the July War. In art there’s always something personal and also something that is relatable to others. My car installation, for instance, with personal belongings tied to the roof, has resonated with people from so many different countries. To this day, the idea of ‘HOME ’ is still confused in my mind. Permanence has no place.”

“Resilience is something people can still relate to, even those who never lived through war.”

The concept of HOME is not the only thing that has been lost though. “The idealism that ran through the veins of my father’s generation is portrayed in my Al-Mulatham, or freedom fighter, series featuring men wearing feda’iyeen’s kuffiyeh. There’s a huge gap between then and now. This said, the resilience is something people can still relate to, even those who never lived through war.” Lately his subject matter has included MEA planes, the famous “Egg” building in downtown Beirut, embassies, burning tires, and flags. It bridges the local with the international playing field. It is poetically political. Baalbaki cannot predict which direction his art will take but does admit that: “each painting takes me somewhere. Many things are clear in my mind but come out differently when I execute them.” This is why each of his paintings is a visual adventure for the viewer. His captivating mix between neo-expressionism and pop art speaks to the mind and the soul. And his work goes beyond painting to include installations and other media. He even likes to experiment with low-cost materials such as neon lights, which remind him of the shop signs in popular neighbourhoods. But painting is his main form of expression. He loves to express with his brush.

“Money is a necessity but not a sign of success.”

Beyond the bright blue eyes and tattooed hands lies an artist with a fascinating personality. Baalbaki is not driven by money; it is a necessity, but not a sign of success. He is on a quest to find himself as an artist and to explore his realities. And yet he confesses that, “I have not found myself yet. It is a journey and I haven’t reached my destination.” In Baalbaki’s opinion,there are “no regular people.” Everyone has the potential to make outstanding contributions and observations. This is why he rejects the idea that the artist sees things other can’t. The only “unseen” is the technique and work that goes into each creation, or “the cooking of the painting” as he calls it. He sees time as a healer and has no sense of regret.

“Movements in the region rise and fall. There’s rupture and no continuity and we simply try to hook the pieces together.”

All this seeming optimism and egalitarianism masks a realist’s hopelessness. Baalbaki believes: “the entire region is going through its worst period. Geographically the Levant has long been a point of exchange between the West and the East. Things go through us. And yet we are not currently making major contributions to politics, science and technology. We’re not a force of innovation. In the past, the Fertile Crescent offered the world so much. Movements in the region rise and fall. There’s rupture and no continuity and we simply try to hook the pieces together.” Baalbaki is not blinded by superficial ideals of nationalism. In fact, Lebanon is the people is him. His family and friends. They are what ties him to the country. And yet his themes and subject matter are potently Lebanese at heart with a raw universal appeal. His art is the voice of the nation and entire generation.