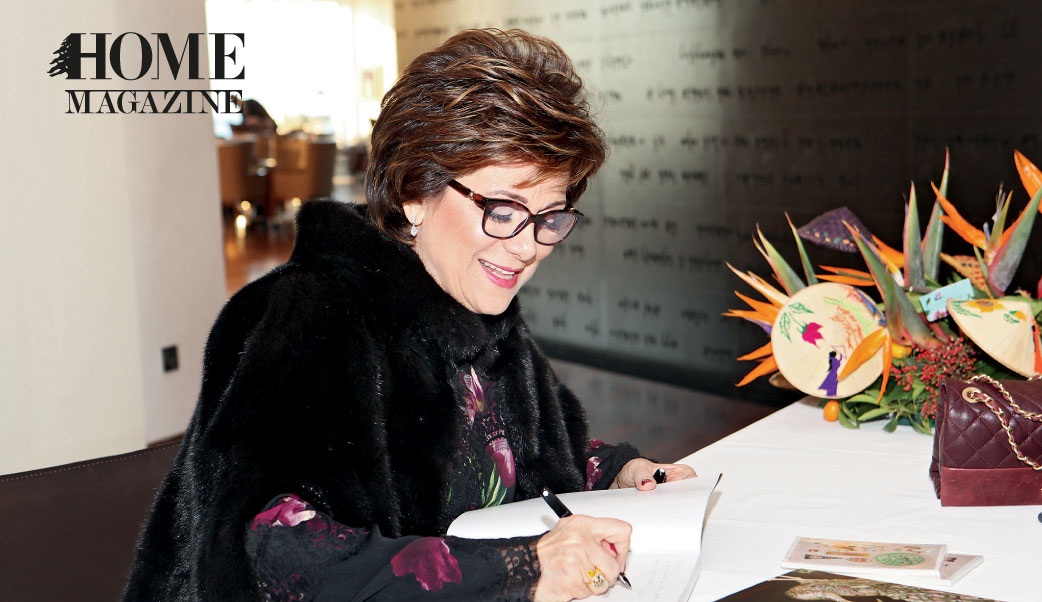 Travel writers from the Middle East are quite rare, especially when it comes to women.

We are actually more familiar with the witty musings of Westerners who depict their travels in literature; from Lawrence of Arabia, Freya Stark, and Ernest Hemingway, to more recently the novels of Paul Theroux, Bill Bryson and Elizabeth Gilbert (author of the memoir Eat, Pray and Love). Leila Amad Bissat, an avid traveler from Beirut, was inspired by many of them and began to document her own travels about 20 years ago when she made her first trip to China in 1998 with the American University of Beirut Museum’s Society of Friends.

“I just write what I see,” says Bissat. “I didn’t want my experiences to just be scattered in the wind without a mark.” The author believes anyone can find themselves in her books. She hopes her readers can identify with her experiences, and that it brings her closer to them. This desire to share her experiences and connect with others compelled Bissat to write her first travel book Of Symbols and Stones in 2007.

In each chapter, Bissat manages to capture the essence of the country, or in some cases just one city, with her nuanced narratives. In her chapters she cleverly weaves together a brief history of the place, the socio-cultural climate, and her observations about the people she encounters, along with the sights starting from point of arrival to the end of the journey. While the first book was a compilation of her random travels, Bissat claims in hindsight that the common thread for her was two things: “the lines of faith and how faith criss-crosses with the roads of commerce, which is the Silk Road.”

Her second and latest book Of Whispers and Winds, which was released in 2017, was more planned than the first one, admits Bissat, and focuses purely on the Far East and South East Asia. “I am fascinated by East Asia and set out to visit as many places as I could,” explains Bissat. Of Whispers and Winds begins in China and ends in Sri Lanka. In between, the author takes you to Vietnam, Cambodia, Thailand, Malaysia, Singapore, Bali, Bhutan and Nepal. In her book, Bissat aims to distinguish each country and portray its unique character. “We tend to see people from this region as all the same,” says Bissat. “This is also true for how they see us in the Middle East.” Bissat once again manages to showcase each country beautifully with her prose and this time she uses artifacts and souvenirs from each place. The thick softbound book is artfully curated using pictures of the objects that she has chosen to represent each country, along with various images of herself and her travel companions on location.

Spending an average of 10 days to two weeks in each country, Bissat would always see the important landmarks but also would go off the beaten track to see the small remote villages to get a feel of the natives and their lifestyle. Colorful teapots, woven hats, bronze statues, opium pipes, ornate boxes, teaspoons and fabrics are just some of the mementos from Bissat’s personal collection of travel objects that are photographed in the book.

Of Whispers and Winds was edited by Dr Laila Osman Asser and came together with the help of Studio Safar graphic design team and the photographer Tanya Traboulsi.

Messages to Bind Us Together and to Preserve Identity

Bissat’s latest book not only educates and entertains but also touches on important topics that affect changing societies, which are also being faced in Lebanon. “Many of these countries suffered from colonialism and long wars,” says Bissat. “Yet, they are rising from their scarred past.” Bissat points out that many of these countries send migrant workers to the Middle East and as a result collectively are perceived as maids and cleaners. She also wants the Lebanese not to forget their own humble past (facing war and famine) and to acknowledge their ancestors who immigrated to the Americas and Africa, many leaving HOME with next to nothing. “In the same token we must not look at the Nepalese and Sri Lankans here as simply workers. We must not stigmatize. This is one of the messages in this book,” says Bissat.

Another poignant message is about the preservation of culture and identity through the objects she collects from each country. “Each object is a reminder of the human value,” says Bissat. “Whether the item is the work of a child, a woman or an elderly person, the piece has a lot of cultural identity behind it.” The book’s title Of Whisper and Winds represents the fear of losing identity, which is not only referring to the Far East but also to what is happening in Lebanon and in the rest of the world. Bissat believes this is partly due to the invasion of manufactured objects from China, and from the new rising star of manufacturing, which is India. Unfortunately, a major livelihood of the East is its craftwork and Bissat fears it is slowly going to disappear. Finding these items and capturing them in her book is perhaps one way of immortalizing them before they are forgotten. “The whispers of the wind always tell me there is this object here, or there. It follows me or I followed it there,” muses Bissat, describing how she finds these objects when she is abroad.

The third message the book conveys is the idea of having an open mind, says Bissat: “We must always go to a new country with an open heart and clear eyes and not to build prejudice. Prejudice only builds walls. I hope my books will cut any preconceived ideas about the country I talk about.

Bissat is now planning her third book (to make it a trilogy), which she says will be in a different format. The next book will be based on her travels to South America and touch on the impact that the Arabs, and the Lebanese in particular, have had on that continent. With her highly impressive two travel books to date, we can only imagine what colorful stories and illustrations she will bring back HOME to Lebanon in her next travel labor of love…