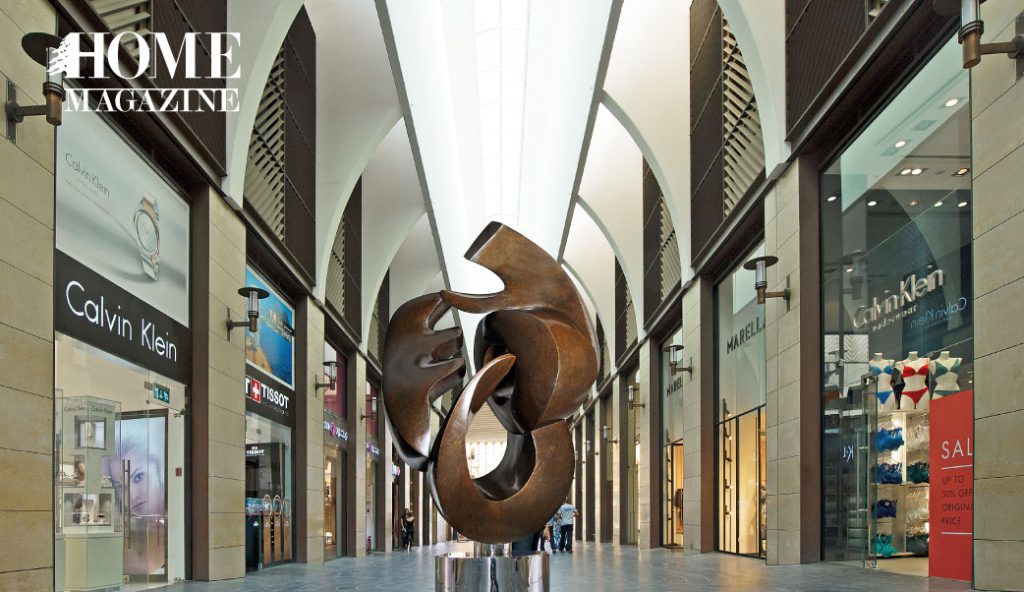 Lebanese architect turned sculptor Nayla Romanos Iliya has something of a love-hate relationship with the country of her birth.

When Nayla left during the civil war years, it was a country in turmoil, and having now returned she has found something similar although for different reasons. What she has experienced on her return is a cultural and creative dynamism that wasn’t present when she left, and her change in career mixed with this fresh and burgeoning scene has provided her with an artistic and emotional awaking. This awakening is present in her first series of sculptures that look back thousands of years to the earliest days of Lebanon, but which also retain a relevance in the identity of the Lebanese people and Lebanon today.

After years of living in different parts of the world, mainly in Europe and Asia, Nayla and her husband landed in Dubai. Returning to live in an Arab country sparked a curiosity in Nayla, which developed into a longing to understand her identity and try to settle the mixed feeling that she has for Lebanon. “Landing in Dubai, which incidentally is the place where I started doing sculptures, made me open my eyes to the arabic identity.” From this exploration of the arabic identity, Nayla focused her interest on the Phoenicians.

Undoubtedly the ancient Phoenicians’ greatest contribution to the world was their invention of the alphabet. Masters of the sea and great entrepreneurs, they needed a way of communicating with foreign traders; this need led to the creation of the first phonetic alphabet, which went on to form the basis of most western languages, Arabic and other modern alphabets used today. In a tribute to the huge influence that it has had on the world, the Phoenician alphabet was, in 2005, registered by UNESCO into the Memory of the World Programme as a heritage of Lebanon.

“The Phoenician alphabet was, in 2005, registered by UNESCO into the Memory of the World Programme as a heritage of Lebanon.”

For Nayla, this was not just an incredible part of Lebanon and her heritage, but also something that is woefully under appreciated by the Lebanese. “From an aesthetic point of view, the letters shapes are very contemporary. I realized during my research that every letter has a meaning and this makes it more interesting, because when you look at the symbol you can imagine the meaning.”

Even with cursory glance of the Phoenician alphabet you’d be able to spot shape that bears a resemblance to our own modern alphabet. The ‘kaph’, which is written as a backwards ‘K’ stands for the palm of a hand, or the ‘ayin’ which symbol is a circle just like ‘O’ represents the eye. The meanings of these letters held a bearing in the daily life of the Phoenicians. The ‘aleph’, for example, which is written as a sideways ‘A’, was a representation of an ox’s head, a tough creature, which was used to signify strength and leadership. “All those layers of meaning started to be part of my sculptures. It started evolving from a very calligraphic interpretation, to a more three dimensional one, and then I was creating dialogues between several letters, trying to convey a message, by either creating a word or by having an interaction between a couple of sculptures through their meaning.”

The sculptures that Nayla created for this series are not just linked to the past by subject matter, but also by the materials that she has used. The letters are for the most part cast in bronze, which was an important metal for the ancient Phoenicians, being used for a multitude of different purposes. These bronze sculptures are fixed on a base of layered plywood, representing the layers of civilization, with a shiny steel top layer giving off a mirrored effect. “This is a symbol of the water, because the Phoenicians spread their alphabet through their maritime journeys.”

Just as the Phoenicians spread their trade and language across the world, Nayla hopes that she can be an artistic ambassador for Lebanon. So far, her work has spread naturally, as members of the Lebanese diaspora have purchased her sculptures. Nayla believes that they share an affinity with the work because of their decision to live abroad and the subject and nature of the work that she has produced. She hopes the organic growth continues to reach more people, not necessarily sharing a Lebanese heritage, but simply connecting with the ‘language’ she created and its source of inspiration.

Nayla has spent most of her career as an architect and cites herself as a young artist, but finds a crossover between her old and new career. “What was very interesting for me was how you express yourself through your work and the therapy you get during the process. When you create a piece of art, it doesn’t have to have a function, while a piece of architecture or furniture needs to have a functional aspect. When you replace this with your personal emotions it gives you art.”

Her first series is strongly connected with Lebanese history and identity. Nayla plans to continue this exploration of identity in future works. “I’m very interested by identity. Identity is made of your heritage, but also other layers that I plan to explore in my future works. Of course I will always be influenced by my personal experiences but also my heritage. The Lebanese heritage will probably always be present.”

“I’m very interested, by identity. It is made of your heritage, but also other layers.”

Nayla created this series as an attempt to reconnect and understand her own heritage, and she hopes that for the people that see her sculptures the effect will be the same. “I always like people to realize the importance of the Phoenician alphabet and the spirit of the people behind it and to connect to it. The Phoenician spirit is the Lebanese spirit, whether you like it or not.”