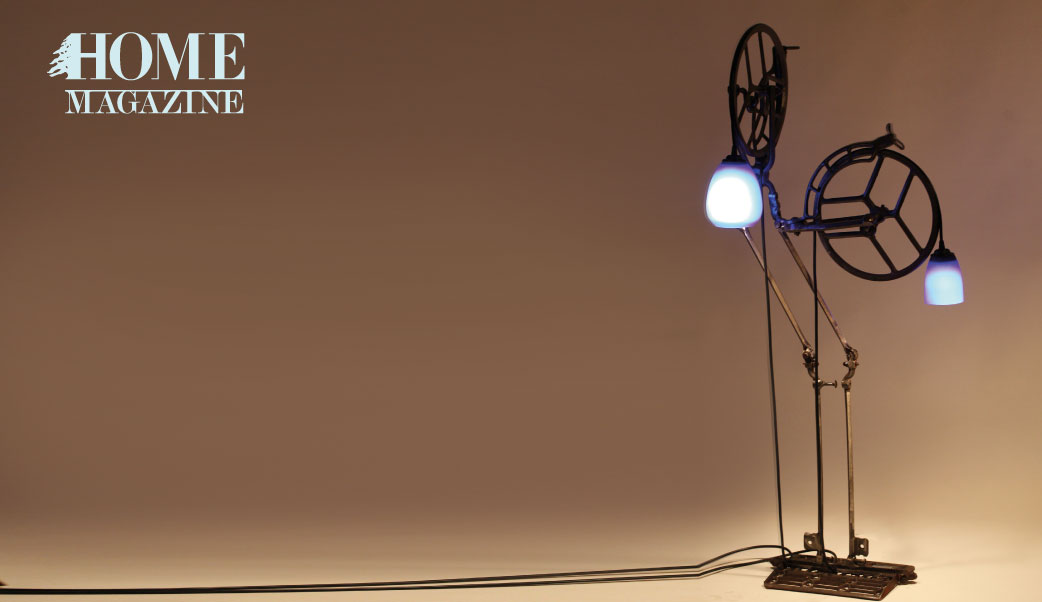 Barrak Naamani became a tailor – taking over his family business in 2009 – after he left a lucrative advertising career in the Gulf. Today his workshop and showroom space in the heart of Hamra in Beirut specializes in bespoke shirts and suits, but Naamani has also become known in his neighborhood and beyond as an artist. His showroom’s window displays, which he designs himself, are always creative and festive, and he has developed a burgeoning side business of unique decorative HOME objects made with antique discarded sewing machines.

“At first my father thought I was crazy,” reveals Naamani. His father Zouheir Naamani’s renowned bespoke tailoring business dates back to 1959 and operated in the more traditional way common of his generation. But when he started to hear comments from customers about the meticulous precision of his son’s shirts and how exquisite the window displays are, he had a change of heart. “Do what you want he told me after a while.” Clearly he trusted his son and confidently passed on the mantle knowing that Naamani is doing things right, albeit in his own particular style.

His style is definitely one of flair, creativity and precision. His bespoke shirts are assembled in a slightly different way today so that seams are ingeniously hidden. Then there are the regular animated store windows, which are highly anticipated by his neighbors. “People come to take pictures,” he says coyly. Finally his most prized achievement is his decorative HOME objects, which have become collectors’ items.

“One day when I was re-decorating my dad’s workshop, I thought the entrance needed a coffee table to go with the sofa,” explains Naamani. He stared at his father’s old defunct sewing machine with the foot pedal sitting in the corner and something sparked in his head. He quickly began sketching tables to be made from the sewing machine and went onto create his first prototype. He learned how to put the metals together and create his sculptural objects by hand. He posted his first table on Facebook and within half an hour someone asked to buy it. (An architect saw it and made him an offer). “From then, people started asking me to make them one and it took off from there really,“ says Naamani.

“One piece titled “Aziza” is named after a woman that lived in his neighborhood… She was this goddess and all the kids would look at her in awe when she was walking. She even left behind a trail of strong perfume.”

All his objects are functional while decorative, mainly as tables or lamps. Today his pieces are all made from antique sewing machines. Many of his lamps are also made using his store’s fabrics. He usually makes a collection of 15-22 pieces and each piece has a name and story behind it. One piece titled “Aziza” is named after a woman that lived in his neighborhood when Naamani was a child. “She was this goddess and all the kids would look at her in awe when she was walking. She even left behind a trail of strong perfume,” he recalls fondly. “When I finished this piece it just reminded me so much of this person.” Other pieces include “The Greatest” which was a table piece he did in memory of the late boxer and activist Mohammed Ali and a light called “Marmar” named after his daughter Maria, who inspired him to start making lamps after the tables.

To date Naamani has had a solo exhibition at the Aida Cherfan Art Gallery in Beirut and he presented his pieces at the last Beirut Art Fair in September 2016. In the same month he was also invited to display his work at ‘Maison & Objet’ in Paris where his entire collection was snatched by one buyer. Recently he has been invited to exhibit at the International Art Fair of New York in April and at the Tokyo International Art in May 2017. Currently, Naamani is working on a new collection titled ‘You & I’. He gladly shows HOME the preliminary sketches, which features abstract figures of a couple intertwined in various poses. Once they are completed, no doubt it will be nothing short of mesmerizing.